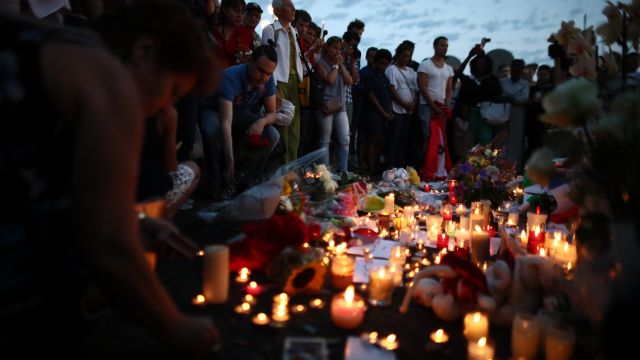 SMS
At Least 3 Americans Are Among The Victims In The Nice Terror Attack
By Katie Link
By Katie Link
July 17, 2016
Almost half of the victims in the attack in Nice, France, have been identified.
SHOW TRANSCRIPT

Authorities have identified almost half of the victims of last week's Bastille Day attack in Nice, France.

On Sunday evening, it was confirmed at least three of the deceased were Americans.

Two of those — a 51-year-old father and his 11-year-old son — were vacationing from Texas with their family.

A family friend released a statement that reads in part, "We are heartbroken and in shock over the loss of Brodie Copeland, an amazing son and brother who lit up our lives, and Sean Copeland, a wonderful husband and father. They are so loved."

A third American, Nicolas Leslie, was studying abroad through a program at the University of California at Berkeley.

"This is tragic, devastating news. All of us in the UC Berkeley family — both here on campus and around the world — are heartbroken to learn that another promising young student has been lost to senseless violence," Chancellor Nicholas Dirks said.

Just two weeks ago, another UC Berkeley student was killed in a terror attack in Bangladesh.

Authorities continue to investigate a motive for the Nice terror attack. CNN reports French authorities were interviewing as many as six people Sunday.

The driver of the truck, who police shot and killed, had a criminal record and was known to local law enforcement but was not on any watch lists.

A news agency associated with ISIS claimed the attacker was "a soldier for the Islamic State."

France's president extended a state of emergency in the country for three more months as authorities work to identify the rest of the bodies.

This video includes images from Getty Images and clips from KCAL, BFMTV and France 24.