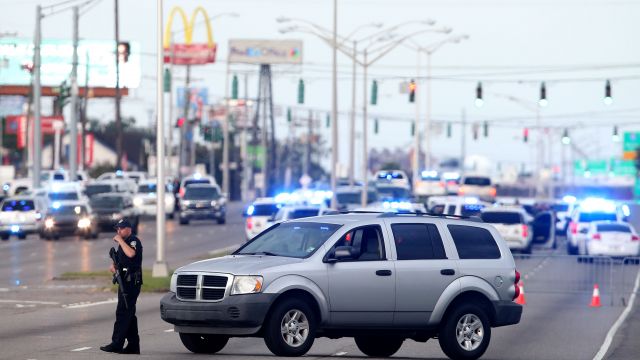 SMS
Police Say Threat Is Over After Shooter Kills 3 Baton Rouge Officers
By Katie Link
By Katie Link
July 17, 2016
Three officers are dead and three others are injured after a shooting in Baton Rouge, Louisiana, on Sunday morning.
SHOW TRANSCRIPT

Three officers were killed and three others injured when a suspect opened fire in Baton Rouge, Louisiana, on Sunday morning.

Police were responding to reports of a man dressed in all black armed with a rifle. Other officers who arrived on the scene shot and killed the suspect.

Two of the deceased officers, Montrell Jackson and Matthew Gerald, worked for the Baton Rouge Police Department. The other, Brad Garafola, worked for the East Baton Rouge Sheriff's Office. At least one of the officers injured remained in critical condition Sunday.

It's unclear if the shooter was acting alone, however WAFB reports authorities were questioning two men. On Sunday afternoon, law enforcement officials confirmed there was no longer an active threat in the city of Baton Rouge.

"We have to do better. An attack on one of us is an attack on all of us," Louisiana Gov. John Bel Edwards said.

The shooting also comes more than a week after police were targeted in an attack by a sniper during a Black Lives Matter protest in Dallas. Five officers were killed, and seven other people were injured.

Last week, law enforcement said they arrested three people after receiving credible threats against Baton Rouge officers. However, it's unclear what the motive was in Sunday's shooting.

"To me, this is not so much about gun control as it is about what's in men's hearts, and until we come together as a nation, as a people, to heal as a people ... we will surely parish as a people," East Baton Rouge Sheriff Sid Gautreaux said.

This video includes images from Getty Images and Facebook / Alton Sterling and clips from WBRZ, WAFB, and WFAA.