At Least 12 Dead After Terror Attack On French Newspaper 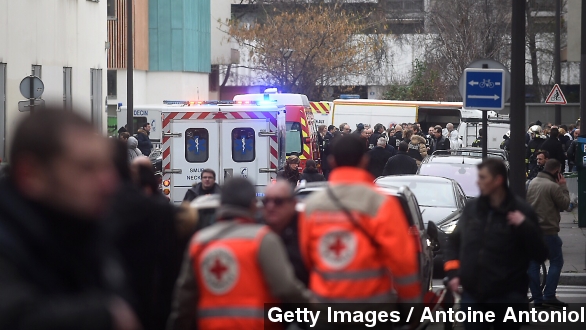 SMS
At Least 12 Dead After Terror Attack On French Newspaper
By Jake Godin
By Jake Godin
January 7, 2015
At least 12 people have died, including a controversial cartoonist, after three gunmen attacked the office of a satirical newspaper in Paris.
SHOW TRANSCRIPT

At least 12 people have been killed and 11 are injured after a terror attack at the headquarters of a French satirical newspaper in Paris on Wednesday.

According to the French TV channel i>TELE, three men in black hoods entered the building of newspaper Charlie Hebdo, armed with Kalashnikovs. They started firing around the building then fled in a hijacked car.

Among the dead are 10 journalists and two police officers, according to a police spokesman briefing media.

The U.S., U.K., Germany and the Arab League have all condemned the shooting, calling it an attack on the freedom of the press and speech.

The paper’s editor-in-chief Gérard Biard, who was in London at the time of the attack, told France Inter, “I am shocked that people can attack a newspaper in France, a secular republic. I don’t understand it.”

The satirical paper has been attacked in the past. In 2011, the offices were firebombed after it ran a satirical caricature of the Prophet Muhammad.

In 2012, against the wishes of the French government, the paper published more cartoons mocking Muhammad, some of which depicted him naked or in a wheelchair. French government buildings in about 20 countries were closed as a precautionary measure. (Video via BFM TV)

The paper’s latest tweet was a satirical image of ISIS leader Abu Bakr al-Baghdadi wishing him “best wishes, by the way.”

There have been contradictory reports on who exactly died in the attack. Stéphane Charbonnier, the paper’s publishing director, was originally said to be in critical condition but is now being reported as having died. (Video via YouTube / Saint Barthélemy)

The paper’s latest issue had this illustration by Charb, titled “Still no terrorist attack in France” and having a terrorist say “Wait, we have until the end of January to present our wishes.”

Police are still searching for the gunmen in Paris, and French media have been warned to be on alert for any further attacks.