At E3, Xbox, PS4 Focus On Exclusives; Nintendo Hangs Back 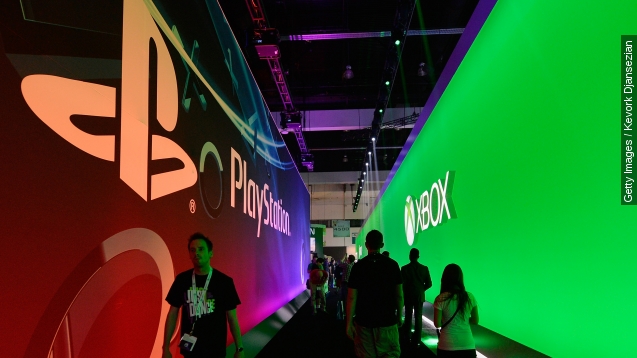 By Ben Lawson
June 13, 2015
At this year's E3, PC gets it's own stage, Microsoft touts exclusives, Sony focuses on first party games and Nintendo hangs back.
SHOW TRANSCRIPT

You can call it E3 or you can call it geek heaven — either would be pretty accurate. The annual Electronic Entertainment Expo kicks off Tuesday and every company is going in with their own strategies to win over fans.

We will start with something new this year: the PC Gaming Show. This is the first year that a full conference is dedicated to the platform; usually there's just some space for game demos on the showroom floor.

There is a long list of companies confirmed to take the stage, but we are most excited for the Blizzard press conference. Hopefully, we will get another look at Blizzard’s first new franchise in 17 years, “Overwatch.” The competitive shooter made a huge splash when Blizzard announced it last year and it could easily do so again at E3.

And after 2K announced "XCOM 2" and a November release date earlier this month, we are pretty much guaranteed to see a whole lot of the game this year.

On the Microsoft side of things, after lagging behind Sony this console generation it seems like the company is trying to build out some exclusive first party titles to keep players on the Xbox One.

Seeing as Microsoft nailed down "Rise of the Tomb Raider" as a timed exclusive for their console, we can pretty much count on seeing a whole lot of that game. And it’s slated for a holiday release, which means we it seems likely we will get a pretty good look at some near-finished gamplay.

We also had this tweet from the Gears of War developers counting down the days to E3. Is this the rumored, remastered collection we have been hearing about? Or is it a completely new installment? We're hoping for the latter.

Back in April, Xbox Head Phil Spencer tweeted that the company "should have some new exclusive IP" to share as well. So it's looking like we will get some brand-new first party games from Microsoft, as well.

But we have heard this kind of thing before. Last year, Microsoft announced it was bringing back "Phantom Dust" as an exclusive for Xbox only to later take the project away from the developer.

We already know two much-hyped Xbox exclusives,  "Scalebound" and "Quantum Break," won't be at E3 this year. And although it's not like "Halo 5: Guardians" won't be a hit no matter what, the company needs some fresh titles if it wants to raise the most eyebrows this year.

Looking over at Sony, that company seems to be resting on the strength of titles everyone is already excited about. Like “No Man’s Sky,” their exclusive indie title being treated like a first party game. Hopefully, we will get a better idea of what you will actually do while flying around those pretty sweet looking planets.

There is also what is looking to be the last installment in the “Uncharted” series, “A Thief’s End.” And there are rumors that a remastered collection of the first three games in the works; if that’s actually real, there is a good chance we will see it at E3.

Then there's Nintendo. After the avalanche of announcements the company unleashed at last year's E3, Nintendo's probably going to take it easy this year.

For Nintendo's docket this year, there is "Mario Maker", their new game that lets players build their own levels and "Star Fox"'s journey onto the Wii U, which we really haven't seen much of. There isn't a whole lot else from Nintendo to get excited about.

The news that "The Legend of Zelda Wii U" was delayed and won't be making it to E3 took some wind out of their sails. So they might find themselves buried underneath all the other gaming news but they don't seem to care.

A few third party developers are also holding their conferences at E3. Bethsda is pretty much guaranteed to be one of the most talked about thanks to "Fallout 4."

Square Enix is going to show off "Deus Ex: Mankind Divided," along with some mystery titles they are being pretty coy about.

Everyone is hoping for a good look at "Mirror's Edge: Catalyst" from EA.

And Ubisoft will continue to milk Tom Clancy for all he's worth with "Rainbow Six: Siege" and "The Division."

There they are, some of the biggest games you can look forward to at this year's E3. The conference opens Tuesday in Los Angeles and wraps up Thursday.