At Davos, World Leaders Get Real About Killer Robots 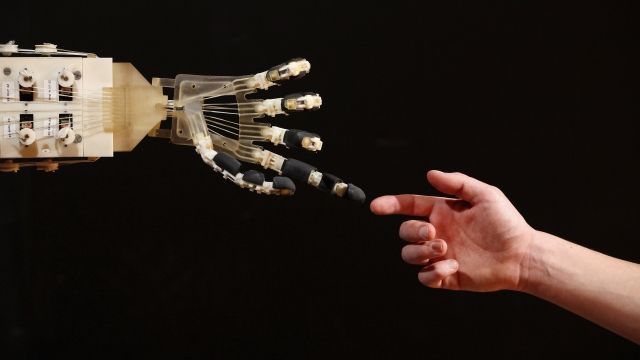 SMS
At Davos, World Leaders Get Real About Killer Robots
By Ethan Weston
By Ethan Weston
January 23, 2016
At the World Economic Forum, there's a lot of talk about robots, artificial intelligence and how all of that could shape the future of war and work.
SHOW TRANSCRIPT

A large group of the world's leaders in business and politics have been meeting in Davos, Switzerland, for the World Economic Forum where they've discussed the future of business, technology and the world at large.

But the talks haven't been very positive this year.

Leaders seem especially worried that science fiction might become science fact: There's been a lot of discussion about the problems artificial intelligence might pose.

There was an entire panel called "What if: Robots Go to War?" devoted to the dangers of autonomous weapons.

The panelists emphasized the ethical dilemma that comes with such machines; they warn removing humans from war might also remove compassion for human lives. (Video via World Economic Forum)

And the Campaign to Stop Killer Robots says this worry isn't far off. Countries like the U.S., China and Russia are already working on building autonomous weapons. They warn keeping these robots out of the hands of non-state groups will be difficult. (Video via Computerworld)

Also at Davos, people are talking about domestic robots, the ones that can grade school papers and do your laundry, and most seem pretty thrilled with them. (Video via World Economic Forum)

But there's an undercurrent of worry: As robots get more advanced, they will begin doing jobs that humans do.

Before Davos started, the World Economic Forum released a paper that calculated as many as 5 million jobs could be lost to automation by robots or software. But it also says these advancements could create about 2 million new jobs in certain sectors.

These are issues that are still a few years away, but more and more leaders in the field are taking notice and urging some sort of action.