At 'Bloody Sunday' March In Selma, Focus Is On Voting Rights 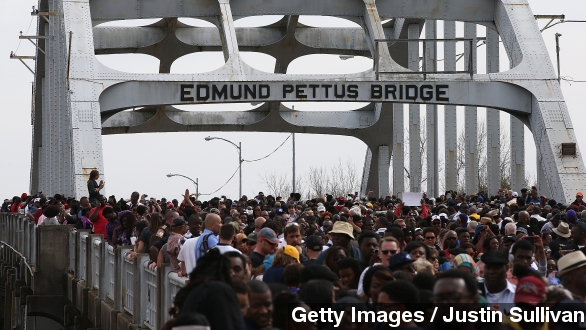 SMS
At 'Bloody Sunday' March In Selma, Focus Is On Voting Rights
By Matt Picht
By Matt Picht
March 8, 2015
An estimated 80,000 people turned out to commemorate the 50th anniversary of the "Bloody Sunday" Civil Rights march.
SHOW TRANSCRIPT

Thousands of people marched down the Edmund Pettus Bridge in Selma, Alabama Sunday.

WIAT reported "An impromptu set of leaders formed the lines, and then they led the march across the Edmund Pettus Bridge."

The march commemorated the 50th anniversary of "Bloody Sunday," when about 600 peaceful civil rights protesters were attacked by Alabama police.

The ceremony began with a service at Selma's famous Brown Chapel AME, the starting place of the Selma to Montgomery marches in 1965.

The Voting Rights Act, which was gutted in a 2013 Supreme Court decision, was a major topic of discussion. At the chapel, Eric Holder said "We will march on until every citizen is afforded his or her fundamental right to vote."

Rev. Jesse Jackson said, "There is a radical resegregation taking place in our society today."

And President Obama said, "The Voting Rights Act stands weakened. ... How can that be?"

One day earlier, President Obama marched across the bridge alongside civil rights icons and over 100 members of Congress.

Sunday's march drew an estimated 80,000 people total — a crowd so large the march had to be briefly postponed. (Video via NBC)

This video includes images from Getty Images, Altairisfar and music from Chris Zabriskie / CC BY 4.0.