At 96, Henry Heimlich Got The Chance To Use His Own Maneuver 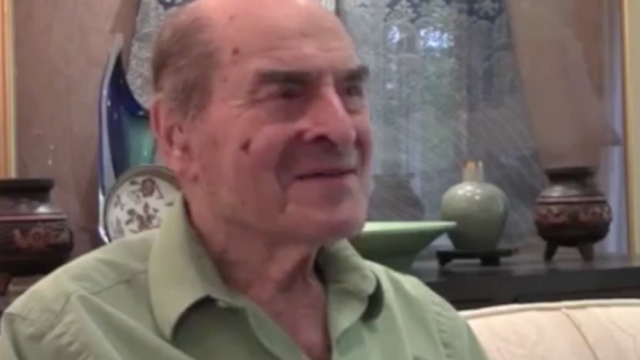 Dr. Henry Heimlich invented the Heimlich maneuver in 1974. He claims his technique has since saved over 100,000 lives.

But aside from his 40-plus years demonstrating the technique for the public, the doctor has never actually done it in real life.

That is, until Monday, when the 96-year-old used his famous maneuver to stop an 87-year-old woman from choking on a hamburger.

"I ordered a hamburger, and the next thing I knew, I couldn't breath. I was choking so hard," Patty Ris said.

That's one of the doctor's fellow residents at a senior living facility in Hyde Park, Ohio.

"And that's Dr. Heimlich next to me. So he did the Heimlich maneuver," Ris said.

"He'd never done it on a patient. He'd always taught people how to do it," she added.

Heimlich said: "I sort of felt wonderful about it, just having saved that girl. And now I knew it was working all over the world, I just felt a satisfaction."

"When I wrote my thank-you note to him for saving my life, I said, 'God put me in that seat right next to you, Dr. Heimlich, so you could save my life.' Because I was gone. I couldn't breathe at all — for a long time," Ris said.

Perry Gaines, an employee at the facility, was called to respond to the incident.

"Everyone was looking. ... It was totally quiet in the dining room at that time. ... I was trained to do it, and I have before, but this is the first time the person who originated it was actually doing it before my eyes," Gaines said.

Gaines said the dining room quickly returned to normal after the frightening episode.

"She was OK right away; she knew that she was in great hands," Gaines said.

There's some confusion on whether this is Heimlich's first time performing the maneuver to save a life; in 2003, he told the BBC he'd saved someone from choking by performing the Heimlich.

Choking is America's fourth leading cause of accidental death. In 2006, the American Red Cross demoted the Heimlich maneuver in favor of the "Five-and-Five" technique, which recommends giving choking victims five back blows with the heel of your hand as a first response.

The Heimlich is now the second option for emergency responders, and the official term for the maneuver is now "abdominal thrusts."