At 60 Years Old, Godzilla Is As Popular As Ever 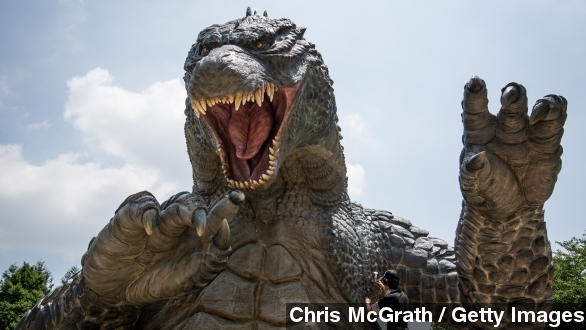 SMS
At 60 Years Old, Godzilla Is As Popular As Ever
By Jamal Andress
By Jamal Andress
November 4, 2014
In one form or another, the Japanese monster has permeated pop culture from the day the original movie was released in 1954.
SHOW TRANSCRIPT

The most famous monster on the planet turns 60 Tuesday.

In one form or another, the Japanese monster — whose name derives from "gorilla" and the Japanese word for "whale" — has permeated pop culture from the day the original movie was released in 1954.

From video games to candy commercials ...

"Except when he's hungry."

Godzilla has terrorized his way all over the planet for six decades.

"Gojira" was released Nov. 3, 1954, in Japan. The monster movie was a special-effects marvel at the time and brought in about $2.2 million at the Japanese box office.

Since it was such a hit overseas, American filmmakers adopted the film and released "Godzilla: King of the Monsters!" two years later.

WATCHMOJO: "Yet his most famous characteristic was his roar, which was created by slowing down the sound of a resin-covered leather glove rubbing across a double bass."

"Gojira" was released nine years after the atomic bombings of Hiroshima and Nagasaki, and as the filmmakers have stated, the now-famous monster was a clear response to those infamous attacks. (Video via British Pathé)

THE WALL STREET JOURNAL: "The film tried to portray nuclear fears through Godzilla. … He is not a mere destroyer; he is rather a victim of a nuclear bomb."

Since 1954, Godzilla has been through more than 30 different iterations, fighting everyone from King Kong to SpaceGodzilla, and it seems like the king of monsters' reign will continue.