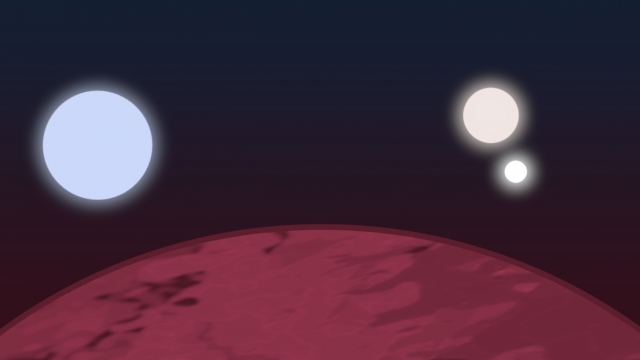 SMS
Astronomers Discovered An Exoplanet Stuck Between 3 Suns
By Evan Thomas
By Evan Thomas
July 7, 2016
This is the first time astronomers have spotted an exoplanet orbiting within a three-star system.
SHOW TRANSCRIPT

One sun is boring. Astronomers using Europe's Very Large Telescope just discovered a planet in a system with three.

The planet, which is about four times as massive as Jupiter, orbits around the system's central star, between it and the other pair of stars farther out.

From the surface, an observer could see triple sunrises and sunsets — kind of like Tatooine but better. And for about a quarter of its orbit, the planet is in constant daylight. As the central sun sets, the other two rise.

It's surprising the planet is there at all. The researchers say the gravity of three different stars pulling in odd directions would usually fling any objects between them out of the system.

So this find could offer insight into how planets form under extreme circumstances and could help astronomers find more exoplanets like it.

But systems with two or more stars are more common than single-star systems. So even though a planet has to get lucky to have this many suns, researchers think there could be lots more like it.

This video includes clips from NASA, the European Southern Observatory and ESO / L. Calçada / M. Kornmesser. Music: "Does Not Compute" By Birocratic / CC BY 3.0.