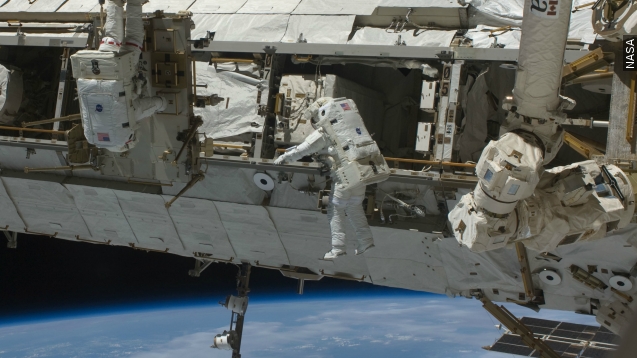 SMS
Astronauts To Make Unexpected Spacewalk After Mobile Transporter Fails
By Samantha Crook
By Samantha Crook
December 19, 2015
NASA says the spacewalk is needed to repair a mobile transporter ahead of the arrival of a supply spacecraft to the International Space Station.
SHOW TRANSCRIPT

The International Space Station is prepping for an unexpected spacewalk. (Video via NASA)

Crew members Scott Kelly and Tim Kopra will be on the outside of the ISS to fix an issue with the station's robotic arm. The problem couldn't be fixed remotely from the space center in Houston. (Video via NASA)

The fix is pretty urgent. The arm is needed to dock a supply spacecraft soon to arrive from Kazakhstan.

A NASA spokesperson told Time the cause of the issue is still unknown, but it could be a stuck brake handle.

This will be the 191st spacewalk for space station maintenance. It'll be the third for Kelly and the second for Kopra — who arrived shortly before the arm showed signs of trouble.

The two astronauts plan to move the mobile transporter rail car that positions the arm so it can be latched in place before the supply spacecraft arrives.