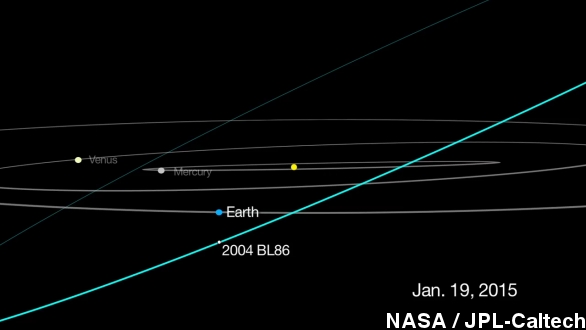 No, it's not a flying license plate. It's an asteroid first spotted by an observatory in White Sands, New Mexico.

Astronomers estimate it's about a third of a mile wide and humming along at more than 35,000 miles per hour, or fast enough to complete its long orbit around the sun every 1.84 Earth years. And it's about to set a record.

2004 BL86 will whip by Earth at a distance of approximately 745,000 miles, or roughly three times the distance from Earth to the moon.

In space terms, that's a very near miss — the the closest pass of any asteroid its size to date, according to NASA, and close enough to see from Earth with amateur telescopes and powerful binoculars.

The agency plans to turn powerful microwave and radar instruments on the asteroid, including Deep Space Network antennas in Goldstone, California, and the giant radio telescope in Arecibo, Puerto Rico.

The detailed images are expected to be the best NASA can collect for the next decade or so.

This video includes images from NASA and the National Science Foundation and music from Chris Zabriskie / CC BY 4.0.