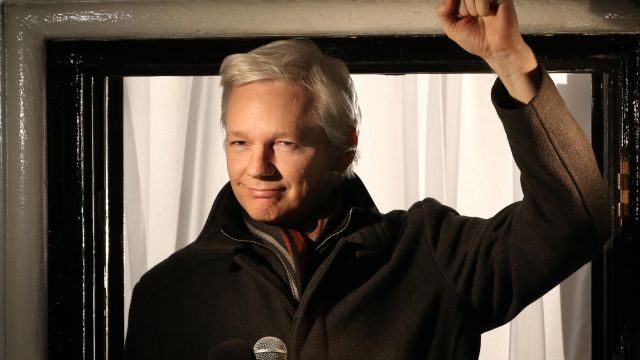 SMS
Assange Denies Link Between WikiLeaks And Russia
By Grant Suneson
By Grant Suneson
September 1, 2016
WikiLeaks founder Julian Assange is defending his organization after a story asserted that its goals and Russia's are similar.
SHOW TRANSCRIPT

WikiLeaks founder Julian Assange is defending his site after a New York Times story asserted the agendas of WikiLeaks and Russia seem to have a lot in common.

The accusations started after WikiLeaks published information stolen from Democratic National Committee computers. Many suspect the Russian government was behind the hack, but Assange says there's no proof.

"There is no concrete allegations by U.S. intelligence services that the material that we have published comes from an intelligence source," Assange said during an interview with the New York Times.

While there haven't been any official allegations from the U.S., President Barack Obama made a not-so-subtle implication just after the hack took place.

Obama told NBC's Savannah Guthrie, "What the motives were in terms of the leaks, all that — I can't say directly. What I do know is that Donald Trump has repeatedly expressed admiration for Vladimir Putin."

WikiLeaks released a statement that said linking the organization to Russia is nothing more than a conspiracy theory. It also pointed out WikiLeaks has previously released "more than 650,000 documents about (Russia) & President Putin, most of which is critical."