Assange Could Finally Be Questioned About Rape Allegations 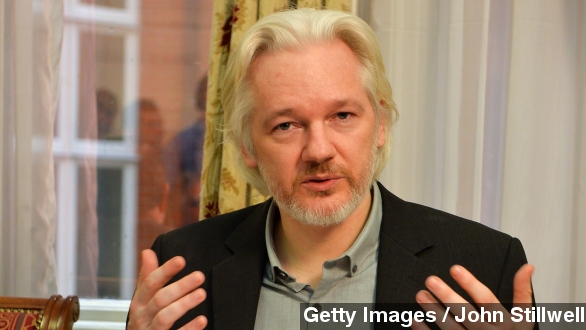 Finally, some headway in the rape case against WikiLeaks founder Julian Assange.

​​Swedish prosecutors have offered to go to London to question Assange about allegations of rape — something his lawyer told the BBC they've been requesting for years.

Per Samuelson told the BBC: "This is a great victory for Julian Assange. We have been asking for this to happen for four years. It is just irritating that it comes so late."

The allegations stem from 2010 when two Swedish women claim Assange sexually assaulted them. Although he hasn't been charged, should prosecutors in the case go to London, they will question Assange about the claims and take a DNA swab.

In a press release, the Swedish Director of Public Prosecutions Marianne Ny admitted she's not too fond of the idea of going to London, saying: "My view has always been that to perform an interview with him at the Ecuadorian embassy in London would lower the quality of the interview, and that he would need to be present in Sweden in any case should there be a trial in the future. This assessment remains unchanged."

But ultimately there is no other choice for Sweden — in less than six months, Assange cannot be charged due to the statute of limitations.

In 2010 the Supreme Court of England and Wales ruled that Assange should be sent to Sweden to possibly face trial. Because of that ruling, Assange asked for and was granted asylum in Ecuador's London embassy and has since refused to leave.

But it's not just Sweden after Assange. The 43-year-old is also wanted in the U.S. after leaking classified military documents provided by Chelsea Manning.

The Swedish prosecutor has asked for permission from both the U.K. and Ecuador, which could take some time. Assange's lawyer says they are confident the allegations will be dropped after his side of the story is heard.