Assad Says He Gets Third-Party Information About Coalition 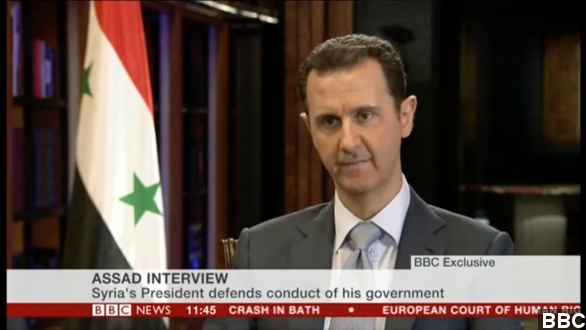 "Through third party, more than one party, Iraq and other countries, sometimes they convey message, general message, but there's nothing tactical," Syrian President Bashar al-Assad told the BBC's Jeremy Bowen.

That was from an exclusive interview Syria's President Bashar al-Assad gave the BBC Tuesday in which he also denied using barrel bombs and said he does not cooperate with the United States because it "backed terrorists." (Video via BBC)

That last part is especially important because speculation over whether the U.S. would be helping Assad by targeting ISIS in Syria has been rampant since the U.S.-led coalition started carrying out airstrikes in the country. (Video via The White House, U.S. Central Command)

The international community has largely condemned Assad for alleged human rights abuses, which include the indiscriminate killing of his own people through the use of those aforementioned barrel bombs, as well as chemical weapons.

Assad was resolute in his interview, insisting his government has only used "bombs, missiles and bullets" to fight both ISIS and opposition forces, whom he also describes as terrorists. (Video via YouTube / Syrian Arab Armed Forces)

Assad hasn't exactly shied away from interviews with Western journalists, but he's mostly stuck to print interviews, so an on-camera appearance with a major Western outlet is significant.

But aside from the revelation about getting third-party information, the interview didn't really tell us anything we didn't already know.

Assad's insistence that he was winning the war against opposition forces in Syria led Foreign Affairs interviewer Jonathan Tepperman to write in The Washington Post, "Either Syria's president is an extremely competent fabulist — in which case he's merely a sociopath — or he actually believes his lies, in which case he's something much more dangerous (like a delusional psychopath)."

President Obama is one of several world leaders who have accused Assad of murdering his own people, and has rejected collaborating with the Syrian government in the past.