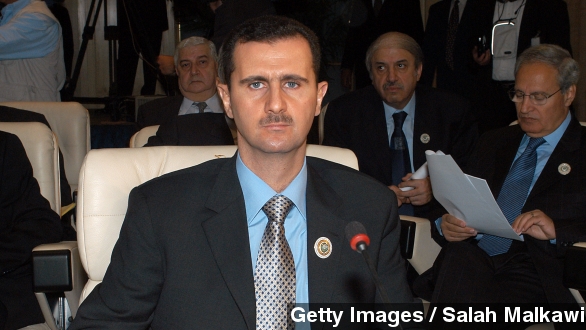 ISIS militants in Syria were hit with a series of airstrikes Saturday. But these bombs weren't being dropped by U.S. planes — the strikes were carried out by the Syrian regime of Bashar al-Assad.

Multiple sources, including Syria's state-run news agency, confirmed the regime targeted an ISIS-run training camp and bakery in the city of Raqqa, the headquarters of the so-called Islamic State. Reports estimate at least 25 people were killed — including 9 ISIS fighters and at least 12 civilians.

This latest attack is part of Assad's stepped up campaign against ISIS. While the regime has been accused of avoiding confronting the militant group in the past, Syria has begun to lash out at ISIS as the group brutally asserts its control over some regions of northern Syria. (Video via CNN)

And the regime's renewed opposition to ISIS once again raises the uncomfortable question: should the U.S. work with Syria to fight ISIS?

FORMER CIA DEPUTY DIRECTOR MIKE MORELL ON CBS: "We need a military on the ground in Syria to take these guys on. The only military around is Assad's military, and as you know we're fighting Assad as well."

CHUCK TODD ON MSNBC: "If you defeat ISIS in Syria, then what do you do with Syria? It's not like you want to be propping up the Assad regime."

As we've noted before, targeting ISIS in Syria will likely require some level of coordination with the Assad regime — a stark policy shift, given that the Obama administration was on the verge of bombing Assad one year ago over his bloody civil war.

Proponents of allying with Assad suggest the U.S. should place strategy over moral concerns in Syria. As Max Abrahms wrote in The New York Times last month, "It's time for the Obama administration to pick its poison by prioritizing the safety of American civilians over the moral objection of helping out a leader who massacres his own."

But that's a few bridges too far for one Daily Beast writer: "On the butchery scale, Assad is leaps and bounds ahead of the Islamic State. He may not be killing Americans and posting gruesome videos of it, but he is responsible for at least 200,000 dead. ... Yes, the world’s a messy place. But lines must be drawn somewhere, and if this isn't where, then we shouldn’t bother to pretend any longer that such lines exist."

ISIS has now forced the U.S. to consider several unsavory partnerships, including working with Shiite militias and with Iran.