Asking For A Friend: Are DJs Faking It? 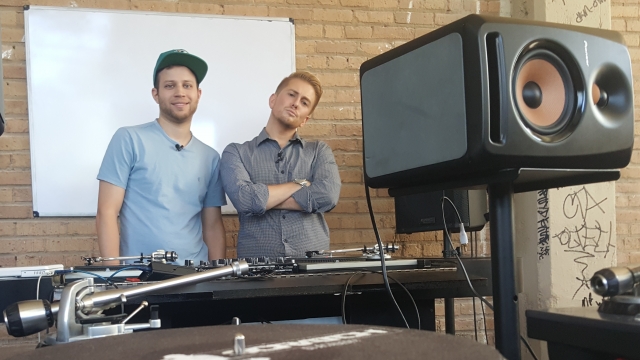 SMS
Asking For A Friend: Are DJs Faking It?
By Cody LaGrow
By Cody LaGrow
September 20, 2016
Newsy's Cody LaGrow took to the turntables and enrolled at Scratch DJ Academy for a quick lesson on how to be a DJ.
SHOW TRANSCRIPT

When you hear the word "DJ," you may think of Madonna in fur, D.J. Tanner or any given music festival headlined by someone with a lively name.

Newsy's Cody LaGrow checked out Scratch DJ Academy in Chicago — one of dozens of Scratch locations across the nation where more than 500,000 students have learned how to disc jockey and produce music. In this Asking for a Friend, we asked school manager Adam Rich, "What's it like to be a DJ?"

Adam Rich: There really is no formula. Something that's easy to remember. Sometimes they just have to combine interests that they like.

AR: There you go.

SEE MORE: Asking For A Friend: What's It Like To Be A Professional Cuddler?

CL: Why should someone prefer an actual DJ over a playlist?

AR: You can't simulate what a DJ does live in front of an audience, from their skills on a turntable to reading a crowd and playing the songs they want to hear and what's going to really kill it.

CL: Let's talk about that. How do you know when to drop "Formation"?

AR: There's a whole process. You start to build the energy. Once 12:30, 1 a.m. hits, that's peak hour time in the club. That's when you're really trying to play the biggest hits there is. Everyone there is dancing, going nuts. That's when you'll see a lot of DJs mixing really quickly and in and out real fast. It's called power setting.

SEE MORE: Asking For A Friend: How Do I Fix 'Skinny Fat'?

CL: When are requests appropriate?

AR: I could tell you that I don't know many DJs who do like requests. I don't mind if someone requests a song. I think for a lot of DJs, the problem is they expect that song to be played right after they request it.

CL: What's the biggest misconception about being a DJ?

AR: Well, in today's age, people think that it's just like pressing play.

CL: Are you acting when you're up there?

AR: I'm not. Everyone here is not. But there are people out there who are.

CL: What's the hardest part about being a DJ?

AR: The truth is more of the challenge is the business side. Getting the gigs you want, playing the venues you want, and having to go through the promoters. The hardest technical aspect is to get the muscle memory down.