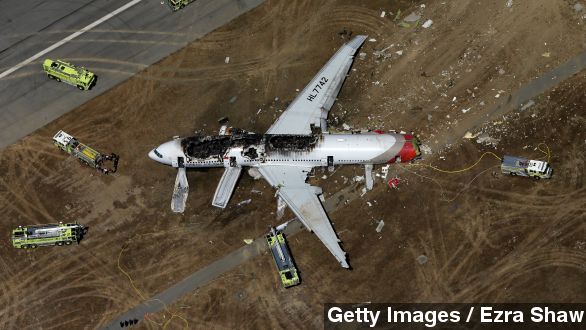 SMS
Asiana Settles With 72 Passengers Aboard 2013 Plane Crash
By Jake Godin
By Jake Godin
March 4, 2015
Asiana Airlines Flight 214 crashed in 2013 and now 72 passengers have settled with the carrier for injuries sustained during that crash.
SHOW TRANSCRIPT

On Tuesday, Asiana Airlines agreed to settle 72 personal injury claims made by passengers on the flight. The amount passengers are to be compensated is confidential.

"That word comes just as new images emerge revealing the passengers and their frantic efforts to get out of that jet alive. You can see the shoots deploy and immediately the passengers racing down them," ABC anchor David Muir said while covering the crash in 2013.

Of the 307 passengers and crew members onboard the plane, 139 received minor injuries, 49 were seriously injured and three died. (Video via CBS)

Both Asiana and Boeing — the maker of the Boeing 777 that crashed — were involved in Tuesday’s settlement. According to the Los Angeles Times, Air Cruisers Co., which made the emergency evacuation slides used by passengers, was also included.

While we can’t be certain how much each passenger will be compensated, multiple law firms have said this case falls under the Montreal Convention since it was an international flight. That means Asiana would owe each passenger up to around $170,000 in compensation.

But a seriously injured American aboard the flight could earn much more according to an attorney who spoke to the San Jose Mercury News in 2013.

Thanks to the Montreal Convention, which China, South Korea and the U.S. have all signed, anyone injured on Asiana's plane can receive the $170,000 in compensation. But due to differences in Chinese and South Korean courts, citizens of those countries may have a harder time getting anything more than that.

Court records reviewed by the LA Times show there are at least 60 lawsuits against Asiana filed in California alone. In January of last year, more than 80 passengers filed a suit against Boeing in an Illinois court.