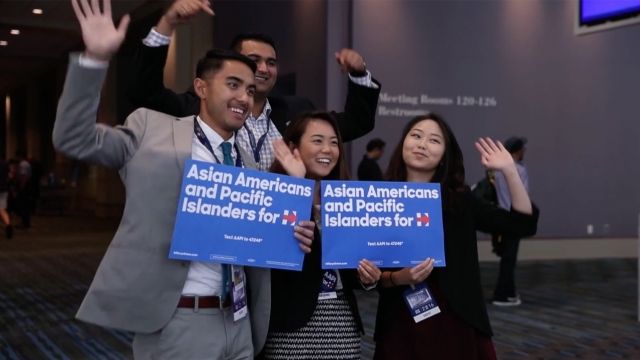 "We have a situation, our inner cities, African-Americans and Hispanics are living in hell," said Donald Trump.

"We've got to address the systemic racism in our criminal justice system," said Hillary Clinton.

It's clear Hillary Clinton and Donald Trump want the Latino and black vote. But they shouldn't ignore the fastest-growing racial group in the U.S. — Asian-Americans.

Asian-American voters typically don't get a lot of attention during election season. That might be because they only make up about 4 percent of the national electorate, and they don't have a good record of showing up to vote.

In the 2012 presidential election, Asian-Americans had a lower voter turnout than blacks, whites or Latinos.

But in 2016, Asian-American voters could be a significant factor in a state like Virginia — a once-red state that could remain blue thanks in part to a 5 percent Asian-American electorate.

That's because Asian-Americans tend to vote in favor of the Democratic party. And it could be because of the increasingly anti-immigrant agenda coming from the GOP.

And in Nevada, history could repeat itself. Democratic U.S. Sen. Harry Reid's 2010 re-election is credited to the Asian-American community in the Silver State.

It seems like current U.S. Senate candidates in Nevada, Catherine Cortez Masto and Joseph Heck, noticed the power of the Asian-American vote. They've actively reached out to the community, which makes up 9 percent of the electorate in Nevada.

The final presidential debate will be held Wednesday in Las Vegas. Trump and Clinton are neck and neck in Nevada.