As US Launches Airstrikes In Tikrit, Who's On The Ground? 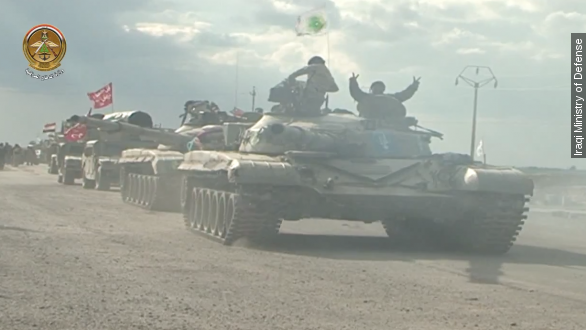 SMS
As US Launches Airstrikes In Tikrit, Who's On The Ground?
By Jake Godin
By Jake Godin
March 27, 2015
With the U.S. now launching airstrikes against ISIS in Tikrit, the three parties involved are making different claims about who is helping whom.
SHOW TRANSCRIPT

After a stalled offensive by the Iraqi military, the U.S. is now conducting airstrikes against ISIS targets in the Iraqi city of Tikrit. (Video via U.S. Department of Defense, U.S. Central Command)

But Shiite militias on the ground with Iraq's national army aren't exactly thrilled to be working with the U.S. — even against a common foe. (Video via Iraqi Ministry of Defense)

That's because some of them, such as Iran-backed Asa'ib ahl al-Haq — or the League of the Righteous — view the U.S. as an enemy rather than an ally. (Video via BBC)

A spokesman for the group said it would rather suspend its operations than allow the U.S. to take credit for liberating Tikrit. (Video via Asa'ib ahl al-Haq)

But speaking at a Senate hearing Thursday, head of U.S. Central Command Gen. Lloyd Austin said Shiite militias were already pulled back as a prerequisite for the U.S. aiding the government with airstrikes.

"Sir, there's about 4,000 Iraqi security forces combined in that area. Currently there are no Shia militia," he said.

And then you have Iraq's Defense Minister Khaled al-Obeidi, who said during a press conference Thursday morning there'd been no change in the handling of the ground operation in Tikrit and that the government had the militias under control.

As much as the Shiite militias might not want to admit it, the battle of Tikrit was in something of a roadblock before the U.S. started launching airstrikes earlier this week at the behest of the Iraqi government.

That's because even after three weeks of a combined offensive of around 30,000 troops, the Iraqi army, Shiite militias and Sunni tribes have yet to fully drive ISIS out of Tikrit.

That's not to say they didn't make any progress; they did. But a combination of IEDs set by ISIS, difficult terrain and a lack of control over militia forces by the Iraqi government has stalled the fight. (Video via Iraqi Ministry of Defense)