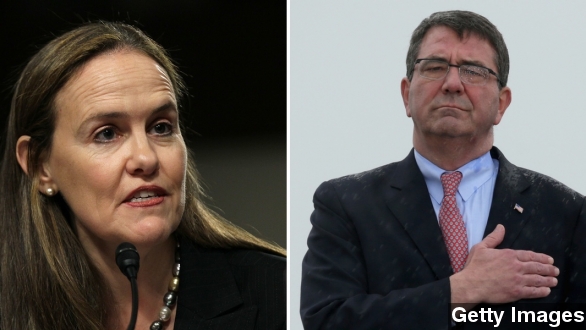 After less than two years as Defense Secretary, Chuck Hagel will soon be out of a job. (Video via The White House)

And Hagel's replacement will need to hit the ground running, with the U.S. ramping up a new military campaign in Iraq and Syria, as well as extending an old one in Afghanistan and confronting an aggressively territorial Russia in Ukraine.

Media outlets are circulating a shortlist of potential candidates, and it really is a short list, with just two likely contenders consistently getting mentioned. Here's a look at who's up for the job.

So far, the strongest candidate seems to be Michéle Flournoy, a longtime defense insider from the Clinton administration who served as the former Under Secretary of Defense for Policy at the Pentagon from 2009-2012.

Flournoy's accomplishments include conducting an influential review of the Afghanistan war, which became the basis for a 30,000-troop surge ordered by the President. (Video via Fortune)

She also co-founded the Center for a New American Security, a nonpartisan think tank which the White House often relies on for policy input.

If Flournoy is nominated, she could become the first female Secretary of Defense in U.S. history. One Foreign Policy writer who worked under Flournoy at the Pentagon wrote in 2012 the former undersecretary's experience and vision make her a great pick for the job.

His previous jobs have given Carter a lot of first-hand experience managing the day-to-day logistics of the Pentagon. He also has a fair amount of credibility on the right — which is important, given how difficult the nomination process is likely to be.

House Armed Services Committee Chairman Buck McKeon told CNN, "The way this president has started out since the election ... I think he's going to have a very tough time getting any nominations through. So we may have Secretary Hagel there for a while."

It's worth noting both Flournoy and Carter were considered for Defense Secretary when Leon Panetta left the job in 2013. Hagel was selected over both candidates due to his political credentials.

Rhode Island Senator Jack Reed was another early candidate floated for the role, but a representative for the senator told The Providence Journal Reed "has made it very clear that he does not wish to be considered."

Outside of Carter and Flournoy, the list of potential candidates grows less and less certain, although current Deputy Secretary Robert Work has also received a fair bit of speculation.