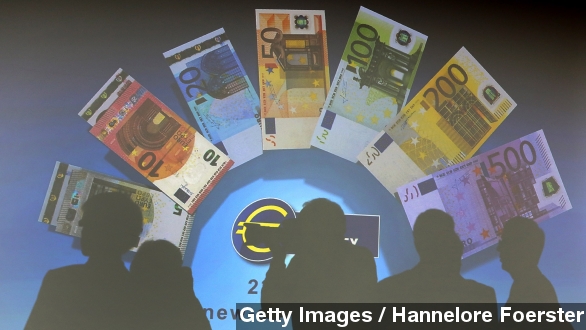 GERRI WILLIS VIA FOX BUSINESS: "Well you've heard about quantitative easing, all that means is the Federal Reserve is buying bonds in the market place to keep interest rates low. They're not going to do that anymore."

But just as one QE door closes, others appear to be opening.

PETER TCHIR VIA BLOOMBERG: "It really looks like the Fed effectively passed the torch on QE and said it's Japan and the ECB's turn."

So why is the Fed effectively ending its quantitative easing program while Europe and Japan are ramping up their own?

The Fed began its first round of quantitative easing in 2008 under then-chair Ben Bernanke. There have been two more rounds of QE since then, with the central bank accumulating $4.5 trillion in assets.

And supporters of the policy say it has breathed new life into the U.S. economy, spurring auto sales and nurturing the fragile housing market.

One of the biggest criticisms of quantitative easing is the risk that excessive reserves held by the bank could cause a massive increase in the U.S. money supply leading to high inflation.

But overseas, that's pretty much what's driving the push for QE.

Last Friday the Bank of Japan, which already had a QE program in place, voted to expand that program after inflation in the country dropped to 1 percent, half of the bank's 2 percent target.

And in Europe – where deflation in Spain, Italy, Portugal, and Greece threatens the eurozone – some are urging the European Central Bank to intensify its quantitative easing program, including one of the bank's former governing council members.

ATHANASIOS ORPHANIDES VIA CNBC: "I believe that they should have already started this. Now that the stress tests are out of the way, it would be quite positive for the euro area if they announce that move as quickly as possible."

Still, analysts say it will be years before quantitative easing can be judged a success or failure.