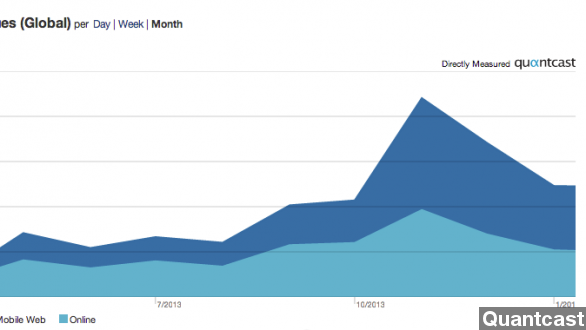 By Jake Godin
February 10, 2014
After Facebook made changes to its news feed algorithms, viral content sites like Upworthy appear to have taken a hit in visitors.
SHOW TRANSCRIPT

​​​​​​Facebook Changed Its News Feed Algorithm. What Happened Next To Upworthy's Web Traffic Will Surprise You.

Sorry, we just couldn't resist. Upworthy's clickbait headlines like "Something Absolutely Terrible Just Happened To The Internet. Here's Why." or "She Couldn't Afford Her Recovery. Then A Dancer Changed It All." helped the viral-content site's popularity skyrocket in November with 90 million visitors.

But web traffic ranking site Quantcast shows Upworthy's unique visitor count has dropped by almost half from November to January — down to just under 50 million unique visitors for last month.

While correlation doesn't necessarily mean causation, the drop coincides with a December decision by Facebook to change how news feeds handle content like user shares of Upworthy stories.

Speaking to Business Insider, Upworthy's cofounder says he doesn't think the Facebook change is the issue. In fact, he said they expected the drop due to a shift in content direction.

But Business Insider examined the Quantcast rankings of three other viral content sites and found two of the three also experienced drops in visitor counts. So, which one did not? Buzzfeed.

Exactly why Buzzfeed's visitor count actually grew instead of shrinking like similar sites over the last two months is a mystery. But one possibility is that the site's foray into serious news coverage might have kept it in good graces with Facebook's algorithm. (Via NPR)