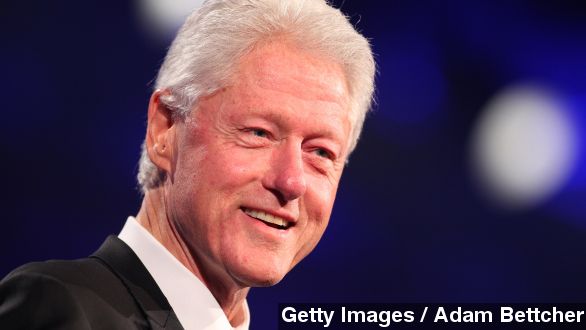 If Bill Clinton thought he finally brushed off one of the biggest political sex scandals in U.S history, he might want to think again.

A painting of former President Clinton in rotation at the National Portrait Gallery in Washington D.C. reportedly contains a subtle allusion to his affair with Monica Lewinsky. (Video via ABC, National Geographic)

Renowned artist Nelson Shanks, who's painted many esteemed public figures, says he drew a shadow of a dress over the mantle, in part, to represent the Lewinsky scandal's effect on Clinton's presidency.

In an interview with the Philadelphia Daily News, Shanks says, "I put a shadow coming into the painting and it does two things. It actually literally represents a shadow from a blue dress that I had on a mannequin. ... It is also a bit of a metaphor in that it represents a shadow on the office he held, or on him."

Shanks also claims the Clintons "hate the portrait" and want it pulled from the gallery, though a spokesperson for the facility says no one has requested that.

Interestingly, Clinton originally requested Shanks to create the painting as part of his portrait gallery commission. So the artist essentially added his secret addition to the painting under the radar.

The portrait of the 42nd president had also sparked controversy when it was unveiled in 2006 — at that time, not for something added to the canvas, but, rather, left off: Bill Clinton's wedding ring. (Video via ABC)