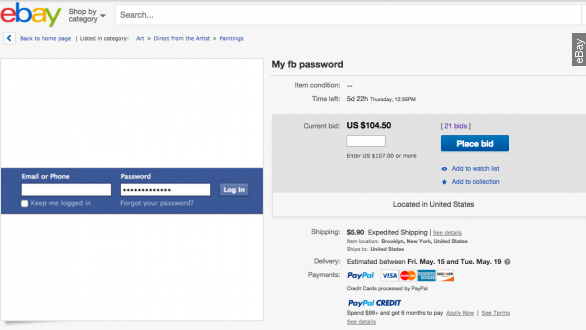 SMS
Artist Selling Facebook Password To Highest Bidder
By Ryan Biek
By Ryan Biek
May 8, 2015
A Brooklyn artist is selling his Facebook login and password on eBay. He says it's a social experiment to see what the buyer will do with them.
SHOW TRANSCRIPT

Most people are doing everything they can to protect themselves online — not selling their passwords on eBay.

But Brooklyn artist Nick Hugh Schmidt is giving his Facebook login and password to the highest bidder. It's currently sitting at just more than $100, plus the roughly $6 shipping fee to send the written document.

He told us his intention isn't to comment on surveillance or hot-button topics like the National Security Agency.

Schmidt says, "It's more of a social experiment to kind of hold the mirror up to the subject and kind of put the spotlight on them — the buyer — and see what they do with it."

Far from being afraid of the harm someone could cause from posting on his behalf, Schmidt said he's excited to see what they choose to do with the power.

He says, "Will it kind of confirm our greatest fears or restore our faith in humanity?"

Here's a look at his Facebook page. It's currently an homage to Jodie Foster, but he wouldn't mind if you changed that.

This isn't the first time Schmidt has offered to open up his private life to those interested, either. A previous "interactive installation" by the artist involved leaving his cellphone in a gallery and allowing visitors to look through anything they wanted –– texts, emails and even photos.

Schmidt did tell us he doesn't want people to think of this Facebook password sale as a stunt of any kind or an attempt to simply gain attention.