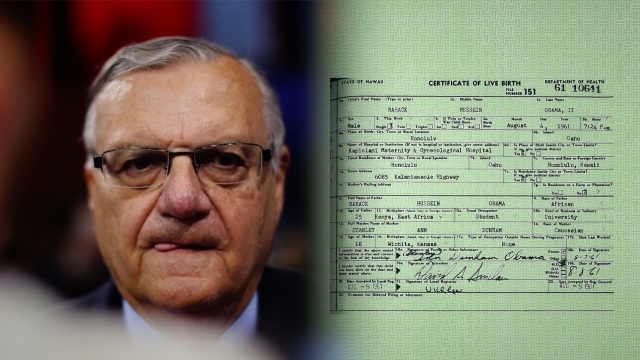 "We were trying to clear the president," Arpaio said during a press conference. "It didn't work out that way."

Arpaio, the outgoing sheriff of Maricopa County, Arizona, stressed this investigation was never about where Obama was born, but rather about the authenticity of the birth certificate.

Obama tried to put the so-called "birther" issue to rest in April 2011 by publishing his long-form birth certificate on the White House's website.

But the Arizona sheriff and his chief investigator spent the next five years investigating that document. They say it has "9 points of forgery."

Based on the angle of some date stamps and type, investigators claim the White House used that woman's birth certificate as a template to falsify Obama's. They also say two experts back that theory.

And while Arpaio's team concluded "it's 1,000 times more probable" that Obama's is a fake, the White House has backed the validity of Obama's birth certificate for the past eight years.

Arpaio said he thinks the results of this investigation would have "profound" implications. But what those implications are remains to be seen.

"All we have ever wanted was the truth in this matter, with the great hope that the document was indeed a valid representation of an original document," chief investigator Mike Zullo said.