Arnold Schwarzenegger Wants China To Quit Pigging Out On Meat 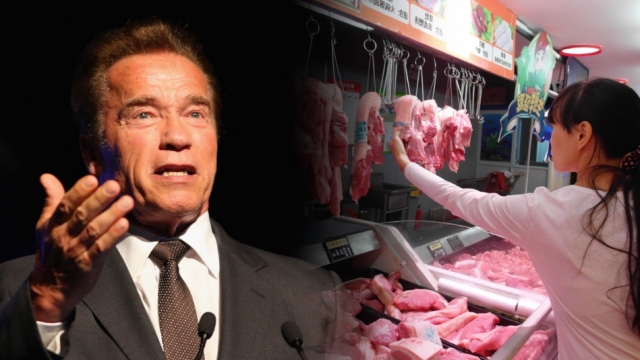 SMS
Arnold Schwarzenegger Wants China To Quit Pigging Out On Meat
By Melissa Prax
By Melissa Prax
June 25, 2016
The burly actor appears in a new PSA that aims to sway China to eat less meat; consuming too much of it can be unhealthy and can hurt the environment.
SHOW TRANSCRIPT

This time, it isn't cookies. But China, Arnold Schwarzenegger wants you to put that meat down.

"I'm slowly getting off meat, and I tell you, I feel fantastic," Schwarzenegger said.

That's because meat is taking a lot of blame for rising obesity and diabetes rates in China.

Its government's new dietary guidelines want people to cut down on the meat consumption, and a WildAid PSA starring Schwarzenegger is meant to get the idea across.

And it's not just health. Meat isn't helping China's massive carbon footprint, and the country has agreed to lower its emissions.

Red meat increases that footprint and is especially popular in the country, where half of all pork worldwide is eaten and produced.

And studies show that meat consumption isn't slowing down.

But maybe Schwarzenegger is the inspiration the country needs.

This video includes clips from Arnold Schwarzenegger, The Economist, WildAid, 20th Century Fox / "Jingle All the Way" and images from Getty Images and stu_spivack / CC BY SA 2.0.