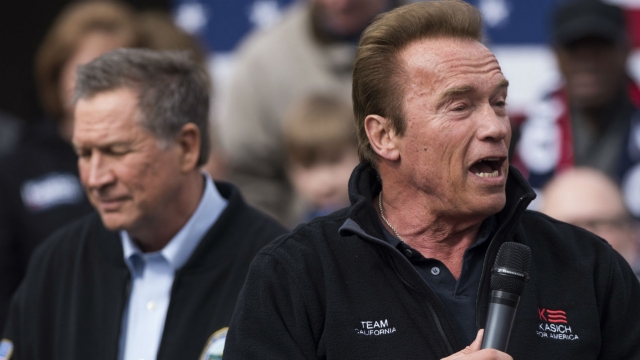 In an election full of attacks on candidates' strength and masculinity, one GOP presidential contender received a very macho endorsement from the Terminator himself.

Kasich has a slew of endorsements from former governors, politicians and newspapers, such as The New York Times and The Boston Globe. But despite that, he hasn't fared too well in the primaries.

He has yet to win a single state, and his delegate count is trailing far behind the other three contenders.

Kasich is betting it all on Ohio, saying if he doesn't win there, he won't be back. But he is confident that he will win his home state on March 15.

"It's now March Madness, and we're heading up north to the place, to my turf, OK? And let me just tell you this: I will win Ohio," Kasich said at the Fox News debate in February.

For now, Kasich is rolling with the action hero theme on Twitter and posted this video of him and Schwarzenegger walking off his bus captioned "How The Governators make an entrance."

The video includes images from Getty Images and clips from Kasich for America.