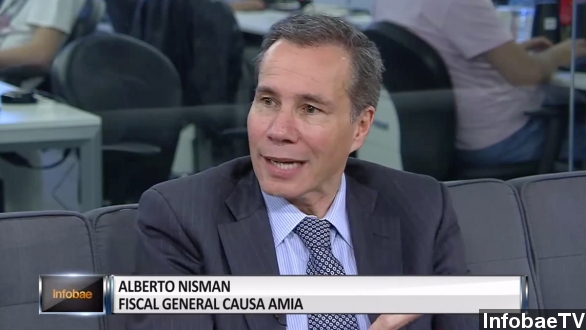 "Puzzling," "strange," "mystery": All words the media has used to describe the death of famed Argentine prosecutor Alberto Nisman.

Last week, 51-year-old Nisman was found dead with a bullet wound to the head in his high-rise Buenos Aires apartment. A .22-caliber handgun and an empty bullet casing were found near his body, and there were no signs of forced entry into his home. (Video via Univision, PressTV)

But the timing of his death has lead many to speculate this isn't an open-and-shut suicide case, but a political assassination — and even reporters involved with the story say they could be in the killers' crosshairs.

Nisman had been spearheading the investigation into the 1994 bombing of a Jewish Center in Buenos Aires that killed 85 people. It is considered the deadliest terrorist attack in Argentina's history. (Video via Jewish News One)

Nisman had accused Argentine President Cristina Fernández de Kirchner and other top officials of a cover-up that protected Iranian suspects believed to be involved in the attack.

He was found dead a day before he was set to testify before Argentina's Congress about those accusations. The sequence of events started an immediate media and public uproar. (Video via Infobae)

Protests broke out following the news of Nisman's death. And it appears most of the public doesn't think his death was a suicide. An Ipsos poll says 70 percent of the more than 400 people surveyed believe he was murdered. (Video via Euronews)

The treasurer of the Jewish center that was attacked told CNN he spoke to Nisman recently.

"He told us he had ostensible proof and he also said he had copies of the evidence in different places," AMIA Jewish Center Tresurer Ariel Cohen said.

Sunday, the Buenos Aires Herald journalist who is believed to have broken the story of Nisman's death left Argentina, saying he too feared for his life.

Even Kirchner, who denied Nisman's accusations, said on her Facebook page that she believes, "The suicide (I'm convinced) was not a suicide."

She also posted a statement on her website last Thursday claiming another party was behind his death. She wrote, "They used him alive and then they needed him dead." (Video via Cristina Fernández de Kirchner)

Damian Pachter, the journalist who fled Argentina, landed in Israel Sunday. Meanwhile, an investigation has been launched into the 10 police officers who were in charge of protecting Nisman.