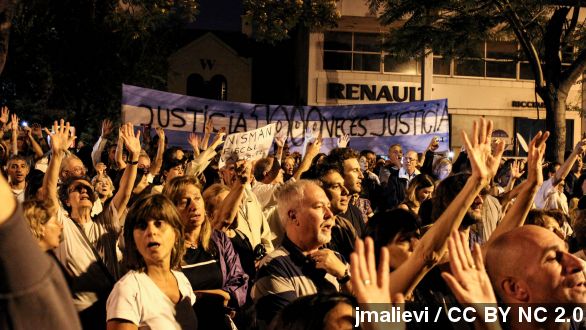 SMS
Argentine Prosecutor's Death: Forced Suicide?
By Jay Strubberg
By Jay Strubberg
January 20, 2015
Alberto Nisman was mysteriously found dead after he accused the Argentine president of obstructing a probe into the 1994 bombing of a Jewish center.
SHOW TRANSCRIPT

There's been a lot of controversy surrounding the death of an Argentine prosecutor who accused the country's president of obstructing an investigation into the 1994 bombing of a Jewish center.

Monday, multiple media outlets say that prosecutor Alberto Nisman was found dead in his high-rise apartment in Buenos Aires. Investigators reportedly found a .22 caliber gun with an empty shell near his body. (Video via BBC)

An autopsy reportedly revealed the 51-year-old shot himself at close range, but he did not leave a suicide note. Officials also say there weren't any signs someone had broken into his place. (Video via Al Jazeera)

For at least the past decade, Nisman had been investigating what is considered Argentina's worst terrorist attack ever. In 1994, 85 people were killed at the Argentine Jewish Charities Foundation in Buenos Aires. (Video via Jewish News One)

The timing of Nisman's death has prompted a lot of suspicion. He was found dead just hours before he was set to testify before Congress over a report about the attack.

The report itself accused President Cristina Fernández de Kirchner and other high-ranking officials of being involved in a cover-up with Iran — charges Nisman had been very vocal about recently.

According to The New York Times, Nisman says Argentine officials "conspired with Iran to cover up responsibility for the bombing as part of a deal that would supply Iranian oil to Argentina."

Plus, one day before his death, Nisman is quoted in an Argentine newspaper almost foreshadowing his demise. The headline's translation reads, "I might get out of this dead."

These details caused quite a stir. And a handful of media outlets speculated Nisman was either forced into suicide, or his death was a part of a murder plot.

Many upset Argentinians voiced frustration on social media and compared Nisman's mysterious death to the show "House of Cards" — in which a murder conspiracy is one of the main backbones to its plot.

Argentine authorities are currently investigating Nisman's death to determine whether he was forced to commit suicide.

This video includes images from Getty Images and jmalievi / CC BY NC 2.0.