Argentina Prepares For Life Without The Kirchners 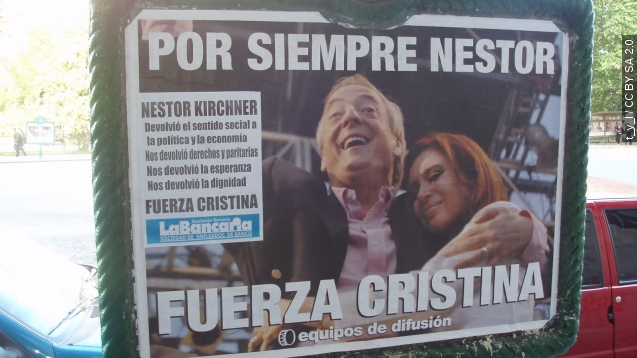 Argentina's presidential elections Sunday mean one thing: For the first time in 12 years, the country will have a president who isn't Nestor or Cristina Kirchner. (Video via TV Pública Argentina)

The last two presidents, husband and wife, the Kirchners shaped Argentina in the new millennium. First through Nestor, who took office in 2003, and then Cristina, who succeeded him in 2007. (Video via Ministry of Education of Argentina, C-SPAN)

Nestor's presidency began in the midst of the Argentine debt crisis and was marked by his confrontational attitude toward the International Monetary Fund, which was charged with resolving it. (Video via C5N, Espacio Memoria)

Kirchner led Argentina's default to the IMF in 2003 — the first of its kind for a country of Argentina's size — and the following economic recovery. He died of heart failure in 2010. (Video via TeleSur)

Nestor decided not to run for re-election in 2007, so Cristina ran instead and won in a landslide. She shared Nestor's defiant attitude, pursuing controversial economic policies that led to friction with the country's central bank. (Video via Central Bank of Argentina)

But both Kirchners' focus on welfare programs boosted their popularity with Argentina's poor, cementing an image reminiscent of the country's first political power couple: Juan and Eva Peron. (Video via BBC)

Like the Perons, both Kirchner governments have faced allegations of corruption, culminating in the death of federal prosecutor Alberto Nisman, who died while investigating an alleged government cover up. (Video via Vice)

The investigation into Nisman's death is ongoing, as are the ramifications of the debt crisis and Nestor Kirchner's default. (Video via CNN)

A group of holdout creditors derisively labeled buitres, or vultures, by critics in Argentina, are still attempting to get the country to pay them for the debt they bought. (Video via Press TV)

And while tackling these issues will fall to their successor, the Kirchners' influence will likely continue — their longtime ally Daniel Scioli is a strong favorite in the election.