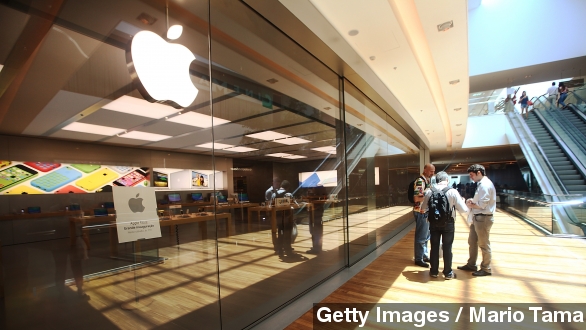 SMS
Are We Really Surprised Apple's Pulling Competing Products?
By Mikah Sargent
By Mikah Sargent
March 12, 2015
Ahead of the Apple Watch launch, the company has reportedly begun to remove competing products from its stores — because common sense.
SHOW TRANSCRIPT

Apple has started to remove competing products from its physical retail locations ahead of the Apple Watch launch.

This, according to Re/code, which says it checked "major stores in San Francisco, Palo Alto, Los Angeles and New York" for products like the Jawbone Up, Nike FuelBand and Mio heart-rate tracker. (Video via Jawbone)

But let's consider this for a moment. Let's say I own a store that sells teddy bears, and I let other companies sell accessories for my teddy bears in my store. Then one day I decide to make teddy bear accessories ... of course I'm going to remove competing products from my store!

FitBit, another popular wearable device, has actually been out of Apple stores for a little more than four months now. (Video via FitBit)

And other than the common business sense of the move, it's not like there isn't precedent. As several of the outlets covering the story point out, Apple chose to pull Bose products from its stores after it acquired Beats. (Video via Bose)

Now, there is one bit of compelling information to glean from this otherwise obvious report. A writer for VentureBeat notes Nike and Apple have been partners for quite some time, and the two may have entered into an agreement ahead of the Apple Watch launch.

"Many believe that an agreement between Nike and Apple was struck long ago wherein Nike would exit the fitness tracker hardware business and focus on the software only. Nike was one of Apple’s original partners in the Apple Watch, receiving key placement of its app on the device's interface."