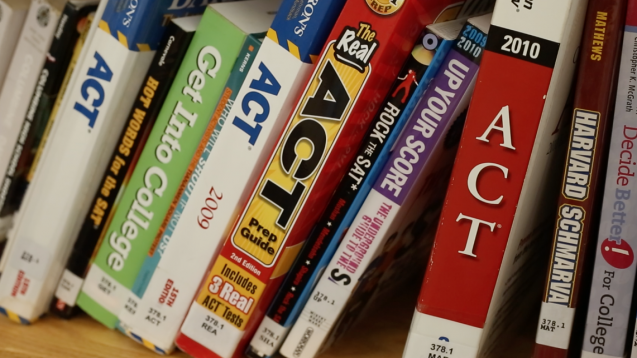 College-entry exams have been a staple in the college admissions process.

But it hasn't always been that way. (Video via College Board)

And their future seems uncertain as more selective colleges try to improve diversity by making those exams optional.

George Washington University is part of a trend in college admissions to go test-optional or test-flexible.

Bob Schaeffer of FairTest, a non-profit that advocates for test-optional admissions, listed some of the reasons colleges and universities are making the switch.

"There's been lots of research done on what happens when you drop SAT and ACT requirements in the admissions process and quite uniformly, schools find no dilution of their academic talent, but are at at a significant increase in diversity of all sorts. Race, gender, income, academic interest. ... By getting rid of the requirements they open the door to kids who are otherwise very talented and can succeed in college if given the chance," Schaeffer said.

But test-optional admissions may not be the cure-all for recruiting and graduating a more diverse student body. (Video via Wake Forest University)

One study suggests that test-optional admissions could simply replace reliance on test scores with reliance on things like Advanced Placement Courses and Extracurricular activities, which students at under-resourced high schools might not have access to. (Video via College Board)

And a reporter at Quartz pointed out test-optional policies to increase socio-economic diversity aren't necessarily being met with increased financial aid. (Video Via The White House)

Critics have also suggested admissions offices could have incentives to adopt test-optional policies that have nothing to do with fairness for students. (Video via Wake Forest University)

For instance, if only high-scoring students submit their scores, a college’s average SAT score can increase. This method of reporting inflates the average without considering the students who applied, but didn't submit scores. (Video via Scantron Corporation)

Adopting a test-optional approach could increase the number of applications a school gets, including applications from underrepresented students, helping it appear more selective. (Video via The Common Application)

But that doesn't necessarily mean these colleges are retaining and graduating the low-income students and students of color they are encouraging to apply. (Video via WXYZ)

Interestingly, while more universities go test-optional to solve their diversity problem, the test itself is changing to tackle the same issue. The makers of the SAT have acknowledged some of the exam's flaws in anticipation of a 2016 redesign. (Video via College Board)

"I am here today because the College Board stands at another pivotal moment. ... We must certainly ask ourselves if we are, individually or as a group, doing all we can to advance equity and excellence," said David Coleman, president of the College Board.

We'll have to wait to see how the new SAT will affect students. The redesign is scheduled for March of 2016. (Video via College Board)

And the same goes for test-optional policies. It may take some time before we see best practices emerge and are able to gauge how they really affect students. (Video via College Board)

This video includes music from Little Glass Men / CC BY 4.0.