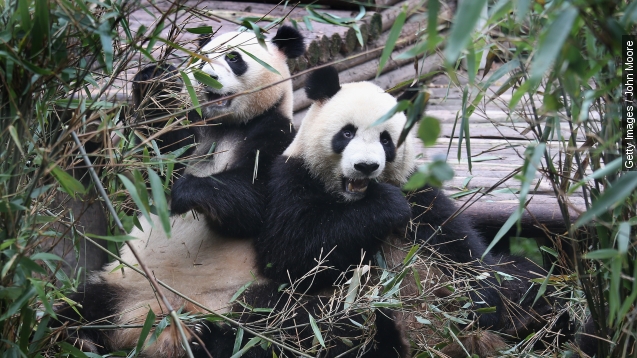 Just like how a little kid might fake being sick to get a Popsicle, another panda has reportedly faked a pregnancy in order to get more snacks and better treatment.

Yuan Yuan, an 11-year-old panda at the Taipei Zoo, started to show pregnancy symptoms after being artificially inseminated. (Video via Taipei Zoo)

Panda fetuses are so small in the beginning stages that pregnancy is hard to detect, so doctors go off symptoms, which include loss of appetite, thickening around the uterus, and increased levels of progesterone. (Video via Zoo Atlanta)

But that's not always an accurate way to judge a pregnancy in a panda. Pandas have something called "delayed implantation" meaning the embryo doesn't attach to the uterus for several months. In other words, doctors initially have to decide if a panda is pregnant based on its hormones.

Now, it's rare for giant pandas to successfully reproduce. And since they're endangered, a panda is given special care if they're believed to be pregnant. (Video via Taipei Zoo)

When Yuan Yuan began displaying symptoms, she was transferred to an air-conditioned room with 24/7 care and a buffet fit for a panda queen. (Video via Taipei Zoo)

But after further testing determined she wasn't actually pregnant, one environmental journalist says there might be a scientific reason for the fake out besides wanting preferential treatment.

Bryan Nelson says pandas can have phantom pregnancies — which means their hormones reflect that of a pregnant panda, but there's no cub developing in their uterus.

This phenomenon happens in 10 to 20 percent of pandas and usually occurs when a panda isn't healthy enough to carry the cub to full term.

But if pandas have figured out how to fake a pregnancy, pet owners better keep an eye out for their furry friends so that they don't follow suit.