Are Palmyra Ruins Really At Risk Of Destruction By ISIS? 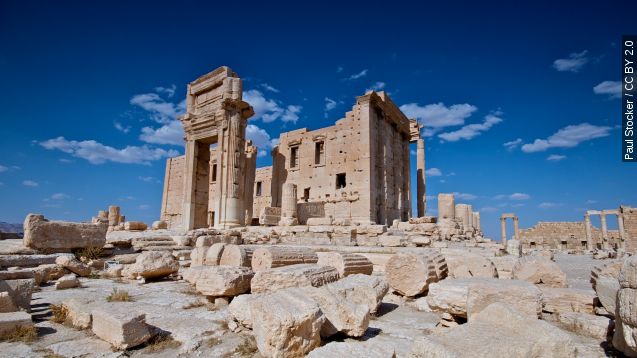 SMS
Are Palmyra Ruins Really At Risk Of Destruction By ISIS?
By Jake Godin
By Jake Godin
May 15, 2015
ISIS and forces loyal to the Syrian regime are battling over the city of Palmyra in central Syria. How great of a threat is ISIS to the city's ruins?
SHOW TRANSCRIPT

ISIS is on the doorstep of Palmyra. But are the ruins actually at risk?

The ancient city of Palmyra and the modern Syrian city of Tadmur adjacent to it are under threat of falling under ISIS control. (Video via YouTube / Robert Zysk, Esq.)

Both Palmyra and Sukhnah, a city about 40 miles to the east, had been held by forces loyal to the Syrian regime up until this week.

ISIS forces overran Sukhnah, taking control of the city and giving them access to Palmyra. The Syrian Observatory for Human Rights reports at least 70 regime soldiers and 40 ISIS fighters were killed during the fighting.

Now the Syrian regime is on the defense in Palmyra, using airstrikes to hold back ISIS fighters. (Video via Palmyra Coordination)

The city's fall would not only give ISIS a much-needed victory after its string of defeats in Tikrit and northern Syria but also control over the more than 2,000-year-old ruins.

Given ISIS' past destruction of the ancient sites of Hatra and Nimrud in northern Iraq, it's likely the extremist group would destroy any Palmyra ruins it sees as idolatrous.

UNESCO Director-General Irina Bokova appealed to international parties on Thursday to protect the Palmyra ruins, calling them an "irreplaceable treasure for the Syrian people and for the world."

But some analysts have noted ISIS' interpretation of Islam doesn't necessarily mean all of the ruins are in danger.

The 700-plus columns of Palmyra have nothing to do with idols. This, says Washington Institute fellow Aaron Zelin, means they'd be spared from demolition by ISIS. That's not to say there aren't any idolatrous ruins that risk destruction, though. There are, such as the famous Temple of Ba'al.

And yet, according to multiple Syrian analysts, the uptick in attention from international media could lead to ISIS destroying them regardless, if only to create more headlines.

Also at risk is a museum dedicated to the ruins within the city. According to a resident who spoke with The New York Times, the Syrian regime has already removed smaller artifacts from the museum.

Correction: A previous version of this video misstated the location of the Syrian town of Sukhnah in relation to Palmyra. The video has been updated.