Are Clinton Emails Going To Come Down To Trust? 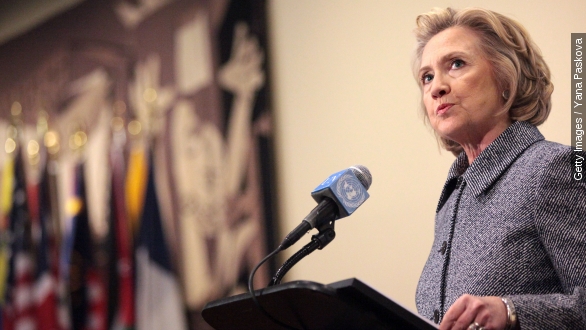 "When I got to work as secretary of state, I opted for convenience to use my personal email account," Hillary Clinton said during a March 10 press conference. (Video via C-SPAN)

Hillary Clinton's lawyers confirmed Friday that personal email account has been gutted since she left public office, a point sure to raise only more questions from Republicans and muddy Clinton's image as she presumably prepares to announce her candidacy for president.

After it was revealed Clinton used a private email server in her home to conduct official Secretary of State business, Republicans demanded to see all emails related to the 2012 Benghazi attacks on the American embassy.

In a response to the House Benghazi Select Committee's subpoena Friday, Clinton's attorneys confirmed all 30,490 work-related emails had already been sent to the State Department for review and Clinton wants them made public. As for the 31,830 emails considered personal? "The secretary chose not to keep her non-record personal emails" and asked that all but the final 60 days' worth of personal emails be wiped from the server.

This potentially explains what Clinton meant when she seemed to offer two different answers during her press conference over what had happened to the personal emails. First:

"At the end, I chose not to keep my private, personal emails," Clinton said.

And then nine minutes later:

"The server contains personal communications from my husband and me and I believe I have met all of my responsibilities and the server will remain private," Clinton said. (Video via C-SPAN)

On Friday, the Benghazi committee's chair Rep. Trey Gowdy said Clinton's "unprecedented email arrangement with herself and her decision nearly two years after she left office to permanently delete all emails" will lead he and his colleagues to consider more steps.

Clinton's attorneys pointed out in the letter the State Department's Foreign Affairs Manual allows employees to decide which records should be preserved, but department policy also says you should conduct day-to-day business through a government account.

Even Clinton admitted she should've conducted official business through a second email account, and the transparency issue for such a high office has been damaging — at least, in the media. After all, we're now truly relying on her word and the word of her attorneys those deleted personal emails were, in fact, personal. It's something she was roundly criticized for two weeks ago. (Video via The Guardian)

"You just told us you didn't follow the rules because having two separate email addresses would be way too big a pain in the ass," "The Daily Show's" Jon Stewart said. "But you know what is a far bigger pain in the ass? Trying to delete 30,000 emails."

But as far as the options moving forward, Politico reports the Benghazi committee plans to have Clinton testify twice — once in private and once at a public hearing. The House Committee on Oversight and Government Reform has also said it will look into Clinton's use of private email.

And as far as whether this has had any tangible effect on her political ambitions, it doesn't look that way so far. Clinton remains the overwhelming favorite to win the Democratic nod for president.

The Huffington Post's running average of 30 different pollsters shows her favorable ratings went up 0.1 percent since March 2 when The New York Times broke the emails story. Her unfavorable rating also ticked up, but only by 0.2 percent.