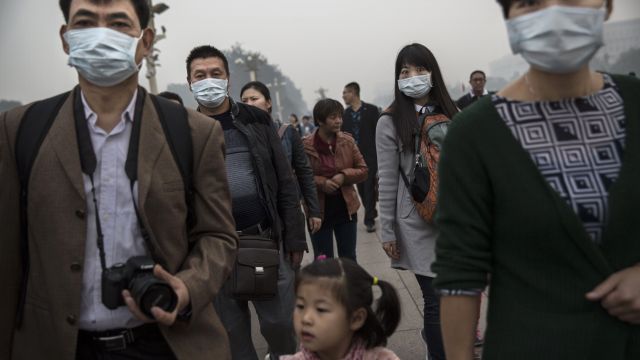 "A few years ago really, even as late as 2008, most Chinese did not consider the air quality to be a serious issue — even though it already was a serious issue," Dali L. Yang, a nonresident senior fellow at the Chicago Council on Global Affairs, said.

"The air quality in China has improved. Most people don’t realize it, but in fact there has been concerted action in the last three years," Yang said.

In December 2015, Beijing issued its first ever red alert.

"It’s actually Chinese leaders such as President (Xi) Jinping today who really are concerned about the air. After all, they live in a major city," Yang said.

"If they want to take a walk, they breathe the same air as the average Chinese.

"So they became increasingly aware of the serious health effects, especially contributing to lung cancer and so on. And therefore they began to ask that something has to be done.

"Chinese leadership is trying to introduce the reconfiguration of how the environmental bureaucracy is being organized and trying to make it more centralized.

"I think for many developing countries, and especially within China, there is this perception of very vigorous federal action by the U.S. government.

"Chinese policymakers and scholars look at the U.S. in great admiration because they think actually we did the right thing in using the Clean Air and Clean Water acts to sort of empower the EPA to act as it does."

China pledged to cap greenhouse gas emissions by 2030. Starting in 2017, it will launch a national cap-and-trade program.

"Leaders have a great challenge facing them, it’s almost like an ethical responsibility to think hard, to act in a way that balances the benefits and bad effects of development," Yang said.

This video includes clips from the United Nations, CCTV and the White House and images from Getty Images.