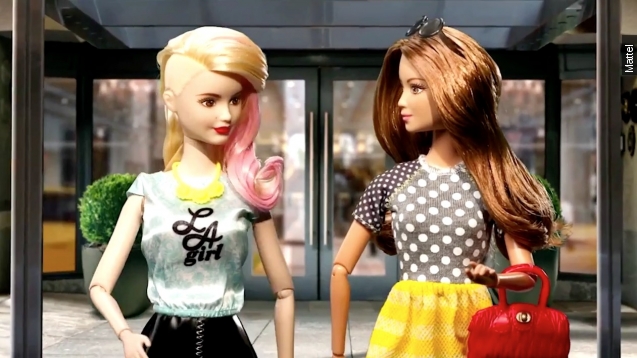 SMS
Are Barbie Dolls Becoming More Realistic?
By Katherine Biek
By Katherine Biek
June 5, 2015
Barbie is becoming a bit more realistic now that Mattel is launching dolls with a variety of skin tones and and adjustable ankles for wearing flats.
SHOW TRANSCRIPT

It's the end of an era. After wearing only heels for 56 years, Barbie can finally give her feet a rest and sport some flats.

Mattel revealed it'll be releasing a new line of Fashionista Barbie dolls that'll come with adjustable ankles. Quite a reprieve for a doll that's been constantly on her toes for more than half a century.

"I don't know, I feel kind of weird," Barbie said in "Barbie in Princess Power."

But you don't look weird, Barbie! The new line will also give children plenty of options for what their doll looks like with 18 different eye colors, 23 hair colors, 14 face styles and 8 skin tones. (Video via Barbie)

That's quite a lot of change for a doll that's pretty much stayed the same since it was introduced to the world in 1959.

"You never know what you can do unless you try."

But with these new changes, it's pretty easy to see that Mattel is trying to make Barbie more like the everyday-girl. Slumping sales may be a big reason for that.

And in September 2014, Lego beat out Mattel in sales to become the world's largest toy company.  All of this culminated in Mattel getting a new chief executive.

Mattel announced in February it would be creating a more diverse line of Barbies to try to boost sales this year.

Now, Mattel's tried to bring a more diverse look to the line of dolls before. It just wasn't that successful.

Beginning in 2013, Mattel began a "Dolls of the World" collection featuring Barbies from different countries. USA Today pointed out the dolls were more stereotypical than authentic to the countries they were portraying.

And as for finally being able to wear flats, Barbie's direct competition — mainly Disney's "Frozen" dolls and those from American Girl — all have flat feet.

You can rest easy now, Barbie! Out of her more than 150 different jobs, we can't imagine it was very easy being a ballerina and an astronaut in high heels.