Are Afghan Troops Ready To Go It Alone? 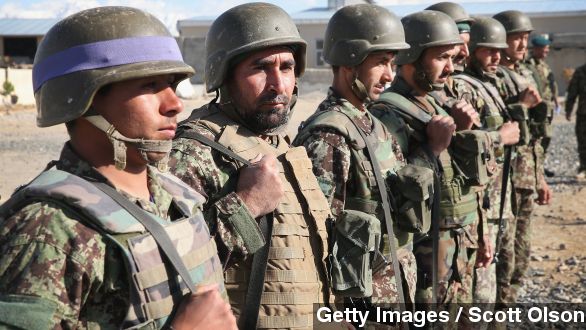 As Afghanistan's military prepares to go it alone, its troop numbers are dwindling. (Video via U.S. Department of Defense)

That's according to a new report from the top U.S. watchdog for Afghanistan. In just one year, troop levels dropped by about 15,000, leaving the Afghan Army with the fewest troops it's had since 2011.

Desertions and low re-enlistment rates were big reasons for the decline.

The report's release comes as the U.S. prepares to return home almost all its 11,000 U.S. troops in Afghanistan working in support and advisory roles. The current plan is to have them out by 2016. (Video via U.S. Department of Defense)

For critics of that timeline, the new numbers are proof — $65 billion later, the Afghans still aren't ready to provide their own security.

Last year was Afghanistan's bloodiest since the counterterrorism mission began in 2001, with more troops dying than in any other year of the war. (Video via RT)

Afghan officials, including President Ashraf Ghani, warn this year could be worse without backup from U.S. and NATO combat troops.

"We are discussing and rethinking the details of the counter-terrorism mission," Carter said. (Video via Government of Afghanistan)

President Ghani is expected to discuss troop levels with President Obama when the two leaders meet at Camp David a few weeks from now.