Sea Ice Might Not Be At A Record Low Now, But It'll Get There 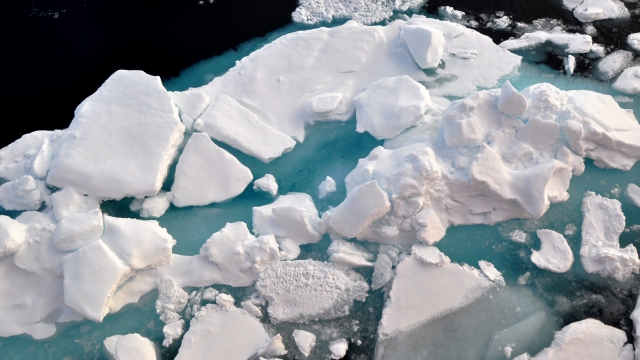 SMS
Sea Ice Might Not Be At A Record Low Now, But It'll Get There
By Lindsey Pulse
By Lindsey Pulse
September 16, 2016
Arctic sea ice levels are at their second lowest ever. The record low was in 2012.
SHOW TRANSCRIPT

Sea ice might not have hit a record low this year, but it's well on its way.

Ice at the North Pole hit the second lowest level ever on Saturday — about 1.6 million square miles. Scientists don't really understand it since the arctic summer wasn't that hot.

The director of the National Snow and Ice Data Center says he wouldn't be surprised if sea ice disappeared completely by the summer of 2030.

Those low levels could cause a lot of problems. First, the planet relies on sea ice to maintain its temperature.

Sea ice also reflects radiation from the sun back into space. And if there's no ice to reflect those waves, the Earth is going to heat up — a lot.

And those levels also affect wildlife. A study released this year showed the growth of 19 polar bear populations fell. Without arctic ice, the animals have no habitat and can't hunt.

Those kinds of effects will eventually make their way south. One climate scientist told the Guardian, "What happens in the arctic doesn't stay in the arctic."