China's Terra-Cotta Army May Have Been Influenced By Greek Art 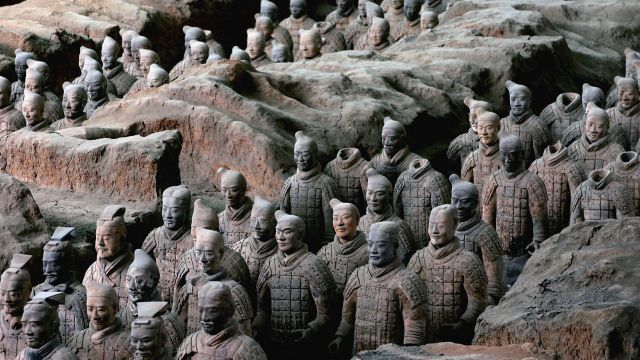 SMS
China's Terra-Cotta Army May Have Been Influenced By Greek Art
By Ethan Weston
By Ethan Weston
October 12, 2016
Europeans might have settled in ancient China and even helped build China's famous terra-cotta army.
SHOW TRANSCRIPT

It turns out China's famous terra-cotta army might have been influenced by the ancient Greeks.

First, the Chinese didn't have a tradition of creating life-sized statues before the terra-cotta warriors — only small figurines. But the Greeks definitely did.

And one study found European DNA in northwest China. That suggests Westerners may have lived in the area around the time the army was created.

If true, that would put Europeans in China about 1,500 years before Marco Polo first arrived.

The terra-cotta army was built by China's first emperor, Qin Shi Huangdi. The army was built to guard him for all of eternity. The statues were discovered in 1974.

One of the archaeologists at the site told the BBC, "We now have evidence that close contact existed ... before the formal opening of the Silk Road."

And a historian studying the warriors said there might have even been Greek artists at the site to train locals.

The new discoveries appear in a National Geographic and BBC documentary titled "The Greatest Tomb on Earth."