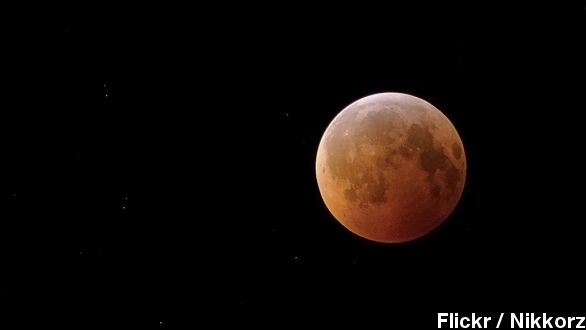 SMS
April's Pre-Easter 'Blood Moon': Bring Out The Conspiracies
By Jake Godin
By Jake Godin
April 4, 2015
With a "blood moon" taking place the day before Easter, the conspiracy theorists are weighing in.
SHOW TRANSCRIPT

For the third time in two years, stargazers and apocalyptic doomsayers Saturday are getting their fill of unique celestial events with a total lunar eclipse. (Via NASA)

Lunar eclipses happen about twice a year when the moon passes directly behind the Earth into its shadow, or umbra. Total lunar eclipses, or "blood moons" are a little more rare. (Video via Óscar Díaz Olivares / CC BY NC SA 2.0)

But what's up with the creepy red glow that gives the lunar event its nickname?

Well, the red color is actually not unlike a sunset, but from the moon's perspective. NASA describes it as "seeing every sunrise and every sunset in the world, all of them, all at once." And that red glow from behind the Earth gets projected onto the moon.

This total lunar eclipse is the third in a series of four appearing every six months, a phenomenon called a "tetrad" – something not particularly rare for this century according to NASA.

While a total lunar eclipse is an interesting sight for stargazing hobbyists, for others the oncoming blood moon and tetrad brings something else – tidings of doom.

CTV News writes that "conspiracy websites draw parallels between lunar eclipses and historical events, like the fall of Constantinople and the founding of the State of Israel," and that the last blood moon outside this current tetrad occurred when the Red Sox won the World Series in 2004. So hey, maybe they'll have a shot this year.

​But perhaps the biggest proponent for any conspiracy concerning the upcoming blood moons is Pastor John Hagee, who released a book titled Four Blood Moons: Something Is About to Change in 2013. (Via The Christian Broadcasting Network)

In a 2013 interview with Fox News, Hagee emphasized the significance that each blood moon will occur during a Jewish holiday.

"To have a blood moon, and then for those blood moons to be on this exact date, is something that just is beyond coincidental."

And with all four blood moons being viewable from the U.S., Hagee claims that as further proof they are signs of our impending doom. Right.

As Think Progress notes, Hagee has caused some controversy before when in 2008 he suggested a connection between God's wrath towards a gay pride rally planned for New Orleans and Hurricane Katrina.

The last of the four blood moons in this tetrad will be viewable later this year on Sept. 28.