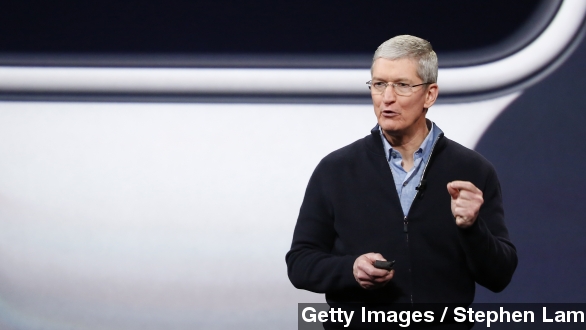 Well, Apple's big Spring Forward event came and went, and, like everyone expected, the Apple Watch was the big highlight of the show.

CEO Tim Cook and company waxed poetic about how we can use the Apple Watch, finally letting us in on the big secret: How in the world the watch can fit into our daily lives. (Video via Apple)

But the big reveal — the one we've all been waiting for — was the final pricing for the device.

--The aluminum Sport starts at $349 for the smaller size; add 50 bucks for the larger model.

The event also answered the last, big lingering question about Apple Watch: battery life. All models of the device will have what Apple calls "all-day battery life," which apparently translates to 18 hours.

Pre-orders for the Apple Watch start April 10, and the device will go on sale April 24.

The next big thing was Apple's all-new MacBook. It's Apple's thinnest version yet and weighs just 2 pounds.

The device sports an upgraded and redesigned keyboard and trackpad and ships in three familiar colors — think iPhone. Apple's new MacBook starts at $1299 and goes on sale April 10.

Last but not least, Apple surprised us all with a bit of news that admittedly started out kind of dull but ended up being one of the most exciting announcements.

And although we would’ve loved to get a look at the rumored iPad Pro the company's supposedly working on, we were happy to settle for a $14.99 a month HBO subscription on a newly discounted $69 Apple TV.