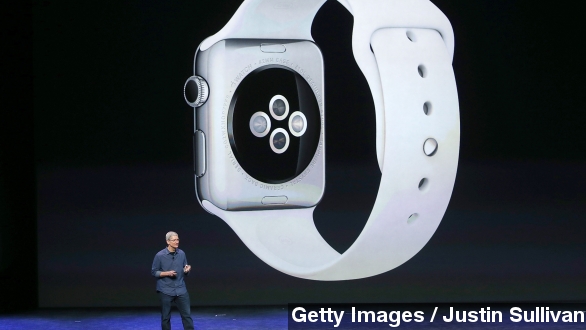 It’s no secret the Apple Watch won’t hold a charge as long as your Timex. Tim Cook has said as much.

“You’re going to wind up charging it daily,” Cook said at the WSJD Live conference.

Now, 9to5Mac cites Apple Watch insiders who say the target is 19 hours of mixed use: occasional app tapping, fitness tracking and raising the watch to activate the display and see the time.

Right now the battery can manage 2.5 hours of constant app-heavy use, and a standby time of 2-3 days. That might not seem like a whole lot for a watch, and sure enough it’s been a point of discussion since Apple first showed it off.

“I’m sure that part of the reason they’re waiting until nearly next year to release it is because they’re going to continue to pursue what the battery life is like on the watch,” Nick Bilton told ABC reporters last year.

“My suspicion is, based on what the other smartwatches out there can do, that they’re pretty close to a full day, if not a little bit above it now.” said CNBC’s John Fortt.

To be fair, the Apple watch is a thirsty little device. It runs on a processor like the ones in the current iPod Touch and supports a retina screen refreshing at 60 frames per second. (Video via Apple)

But Apple’s numbers assume you’re using it like a watch and not like a tiny wrist-mounted phone, so news of a sub-24-hour runtime isn’t coming as much of a surprise to industry watchers. It’s about on par with the rest of the smartwatch industry, and a writer for TechCrunch says that’s okay.

“It can start where consumer expectation for wearables already is, so long as it delivers a superior experience in other regards.”

The latest rumors point to a March release date, so you’ve still got time to make room on your power strip for another charger.