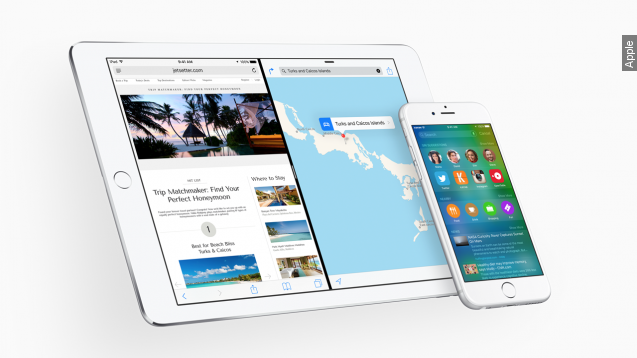 Apple's annual Worldwide Developers Conference began Monday, and the Cupertino company had a lot to announce.

We're going to focus on one particular but very popular platform: iOS. As for the update? iOS 9.

Apple announced the next iteration of iOS with four key areas of improvement: iOS apps, iPad multitasking, intelligence and performance.

First up, News. A lot like aggregation app Flipboard, News is an immersive, interactive collection of articles, photos, videos and stories from publishers like The New York Times, CNN, Time and Bloomberg.

Apple's Notes app got quite a facelift, too. You can now add a checklist, drop in a photo, sketch and link up information — all from within the app.

And say goodbye to Passbook and hello to Wallet. Apple revamped its card-storing application to store not only your credit and debit cards but also your loyalty cards.

Onto the iPad, which is now a whole lot more productive thanks to new multitasking features.

Slide Over gives you a quick glance into apps; Split View lets you work in two apps, side by side; and Picture in Picture is exactly what you're — well — picturing: a way to watch video while you're working in another app.

Next, iOS is going to get a bit more intelligent, thanks to improvements to Siri and updates to search.

Siri can now dive into your apps — from both Apple and third-parties — and pull out specific information. So you can tell Siri to show you photos you took last August, and it will do just that. (Video via PhoneBuff)

And lastly, thanks to "under-the-hood refinements" to iOS, Apple says you'll be able to get an additional hour of battery life on iOS 9. We like the sound of that. You can check out all the details on Apple's website.

This video includes images from Getty Images and Apple and music by Brenticus / CC BY 3.0.