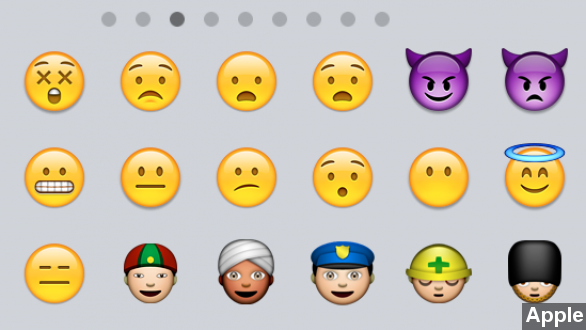 Finally, we have ethnically diverse emojis.

Apple unveiled an OS X 10.10.3 update to developers Monday and it features, among other things, additions to the system's emojis.

As you can see in this Cult of Mac video, holding down on the emoji you want to use allows you to select different skin tones.

And, as this Tykology video shows, additional flags and iPhone devices will be added in as well. Some 32 countries' flags will reportedly be available when the update rolls out to the masses.

All told, about 300 new emojis should be available. Siri will also come with updates including a smoother, more-human sounding voice and additional languages according to reports.

Apple, in the past, has been criticized for not having enough ethnic diversity, featuring predominately white emoji characters and only about 10 national flags mainly from North American or European countries.

An Apple official told MTV in March last year that the company was working on more ethnic emojis, saying in an email, "Our emoji characters are based on the Unicode standard, which is necessary for them to be displayed properly across many platforms. There needs to be more diversity in the emoji character set, and we have been working closely with the Unicode Consortium in an effort to update the standard."

And we got our first glance at new ones last year with a similar Unicode release.

Apple has not yet commented on when this reported change could be made available widespread.