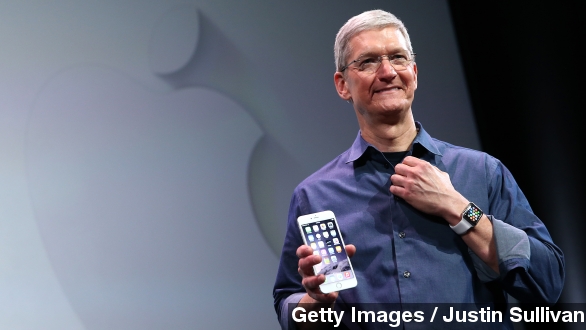 SMS
Apple's Earnings Surpass Expectations
By Danny Matteson
By Danny Matteson
October 20, 2014
It's been a big season for Apple, with a host of new devices helping push up its sales numbers in the last few weeks of the quarter.
SHOW TRANSCRIPT

It’s been a season of change for Apple — a whole new device in the Apple Watch, a shot at credit cards with Apple Pay — oh, and of course those new, bigger iPhones. But now we know exactly how the harvest turned out.

Apple announced it’s better than expected fourth-quarter earnings results at the end of trading Monday — with reported sales of some $42.1 billion. That’s an increase of 12% over last year, and an increase from $1.18 to $1.42 per share.

In a statement Apple CEO Tim Cook said, "Our fiscal 2014 was one for the record books, including the biggest iPhone launch ever with iPhone 6 and iPhone 6 Plus."

Those numbers beat some early earnings predictions. Numerous reports had the Cupertino company’s sales in the neighborhood of $39.85 billion — up about 6% from last year. (Video via Bloomberg)

The report probably looks great to investors considering the series of hurdles Apple had to jump to get here. It faced bendgate, hairgate, a celebrity nude photo scandal involving iCloud, and that whole free U2 album kerfuffle in just the last few months.

On top of that, the Apple Watch hasn’t even hit shelves yet. It’s slated for early 2015.

And the iPhone 6 — which broke sales records in its first weekend — was only on sale for less than two weeks in the U.S. and just a weekend in China during the fourth-quarter.

Despite those issues, the company still reportedly managed to sell more than 39 million iPhones in the 4th quarter alone.

As good as the numbers are though, they likely won’t compare to the numbers the company posts in the 1st quarter of 2015 — which includes the holiday season. According to VentureBeat, analysts are predicting revenue of around $63.52 billion.