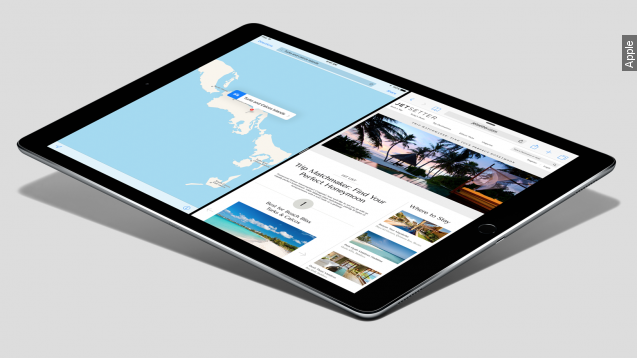 Apple added a new model of iPad to its lineup, and the thing is gigantic. It features a whopping 12.9-inch Retina display.

It's called the iPad Pro, and the company has added a swath of updates to live up to that "Pro" moniker.

It features a new processor that Apple says makes it faster than many portable computers. The iPad Pro got an audio upgrade, as well; the model now packs in four speakers.

Apple stuck to its standard 10-hour battery life and an 8-megapixel camera — no surprises there.

But there were a few surprises. The company revealed two new accessories for the iPad Pro: a stylus called the Apple Pencil and a keyboard cover called the Smart Keyboard.

As for the keyboard, well, it makes typing a little bit easier than tapping away on glass. But we've got to say, the thing looks sort of familiar. (Video via Microsoft)

iPad Pro comes in Apple's standard gold, space gray and silver colors. Prices start at $799 for the 32 GB version and go up from there. You can snag an iPad Pro of your own in November.