Apple Quietly Rolls Out Option To Delete Free U2 Album 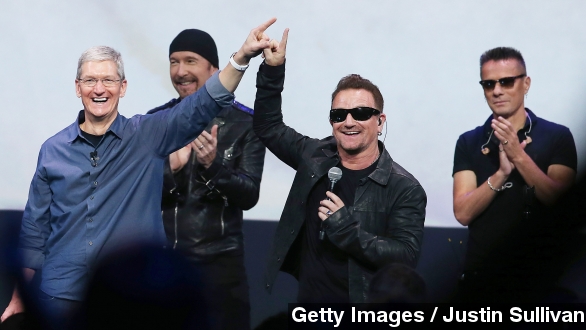 Remember when Apple decided it was a good idea to put the new U2 album on everybody's iPhone for free last week? Well, shockingly, not everyone was crazy about that, and now Apple has released, well, a fix.

If you want to delete the album — called "Songs of Innocence" — you can access the tool through Apple's support page, which redirects users to this inconspicuous page.

Apple put the album on about half a billion iPhones after the launch event and has heavily featured the band in their promotions ever since. (Video via Apple)

The decision, which as CNET notes "perplexed some," got some pushback: "People usually like free things, but not necessarily when they're forced on them unexpectedly, especially with no easy return policy."

That's because you can't actually permanently get rid of anything stored on iCloud.

What you can do is hide it by going to settings, then music and turning off the "show all music" option, which is automatically on.

But beyond the question of musical taste, the move also raised questions about privacy, especially less than a month after a number of celebrities' photos were hacked from the cloud, as Zach Braff pointed out on Sky News.

ZACH BRAFF VIA SKY NEWS: "In this day and age when everyone's worried about security and this big photo leak, it was bizarre timing for them to reach into everyone's phone and put something there."

Some didn't see the reason for all the backlash, like one writer for USA Today who argued that "people love to complain on the Internet. I doubt that many people really have that huge a problem with U2."

One possible reason for the giveaway, as Forbes points out, could be to draw attention to the iTunes store, which some argue is falling in the competition with streaming services. "The fact that Apple gave away U2's album and streamed it on Beats Music instead of trying to sell it as a download for $4 or $5 gives additional support to that theory."

The album will be available on iTunes for free until Oct. 13 ... even if you choose to delete it.