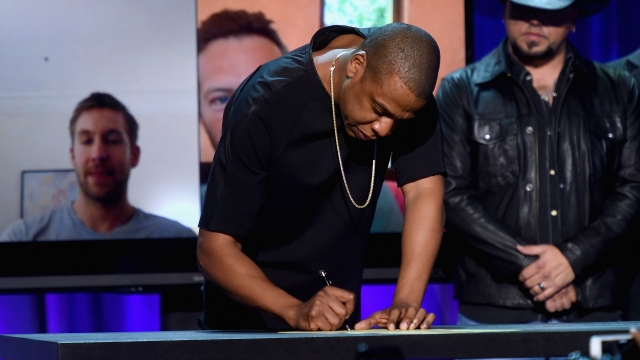 By Samantha Crook
June 30, 2016
An Apple acquisition would prevent Tidal exclusives that might sway listeners away from Apple Music, plus it could help Apple compete with Spotify.
SHOW TRANSCRIPT

Apple might be in talks to buy Jay Z's music streaming service, Tidal.

Apple Music has 15 million subscribers compared to Tidal's significantly smaller 4.2 million. Even though Tidal has a smaller subscription base, it has some substantial star power.

The most obvious artist buy-in is from businessman and rapper Jay Z, but more than a dozen artists collectively own the service, including Rihanna, Nicki Minaj, Madonna, Alicia Keys and Beyoncé.

An Apple acquisition would prevent Tidal exclusives that might sway listeners away from Apple Music and could help Apple compete with Spotify.

A music industry analyst told USA Today the intense rivalry between Apple and Spotify is one factor that could make Apple a highly motivated buyer — which could mean a pretty sweet deal for Jay Z.

Even though a Tidal spokesperson told The Wall Street Journal the talks never happened, the outlet reports people familiar with the companies said the discussion is ongoing but won't necessarily result in a deal.

This video includes images from Getty Images and clips from Apple, Tidal and Spotify.