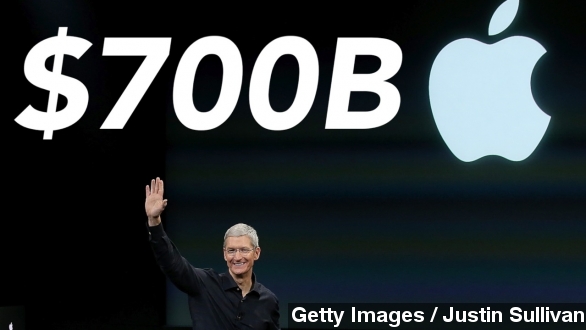 Apple has been on a historic run in recent months, and it just hit yet another milestone — $700 billion.

The company's market value at the end of closing Tuesday landed at $710.7 billion, making it the first American company ever to surpass the $700 billion mark.

If you're keeping track, that's nearly twice the value of the U.S.'s second richest company ExxonMobil, which currently sits at around $380 billion. (Video via Exxon Mobile Corp.)

It's also about double one of its closest rivals. Google's value is currently in the neighborhood of $367 billion. (Video via Google)

There's also this: "Apple, we know, is a $700 billion valuation. The Spanish stock market total value is $664 billion." (Video via CNBC)

So, yeah. Apple is an incredibly valuable company, and it's no secret how it got to this most recent milestone. (Video via Apple)

The company put up massive sales numbers after the release of the iPhone 6 and iPhone 6 Plus in September of 2014, selling nearly 75 million iPhones in the quarter ending in December of 2014. (Video via Apple)

That, along with a 70 percent increase in sales from the same time the previous year in China, made for the most profitable quarter of all-time.

That's not in the history of Apple; that's the most profitable quarter of any publicly traded company — ever.

And the company is making a few moves that could keep those numbers climbing. (Video via Apple)

"We know at Apple that climate change is real, and our view is that the time for talk is past and the time for action is now."

The two companies plan to build an $850 million solar energy farm to power Apple's campuses and stores in California, which will likely reduce energy costs for the company while also reducing its carbon footprint.

Oh, and there is that Apple Watch thing coming out early this year. (Video via Apple)